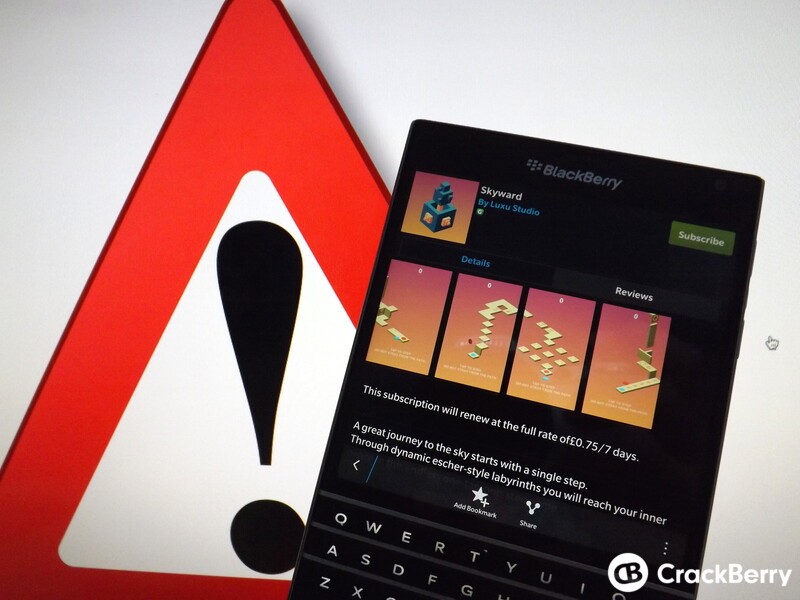 It's pretty unheard of that we steer people away from downloading an application/game from BlackBerry World, but in this case I thought that it was well worth doing exactly that. Let me explain.....

Like many BlackBerry 10 users, one of my morning rituals is to jump into BlackBerry World and see what's new. And top of the 'New Arrivals' list was a game called Skyward. Although the screenshots that are shown look interesting, that wasn't the first thing I noticed. What I did see was the option to subscribe instead of a regular price to purchase. My first thoughts included a swear word! After reading in the text that the subscription would renew at the full rate of £0.75 / 7 days I threw in a few more swear words! As if that's not bad enough there's more......

Then it clicked - I recognized Skyward. So I immediately fired up the Snap store, followed by the Amazon Appstore and hey presto, Skyward is available to download to your BlackBerry 10 device and for free!!!

So the developer that has 'borrowed' Skyward and submitted it to BlackBerry World in the hope of making some money is doing nothing but trying to con us folk on team BlackBerry. Well, it's not working this time. Fingers crossed BlackBerry will read this post and take appropriate action.

Hit up Snap or Amazon from your BlackBerry to get the original and free version of Skyward.