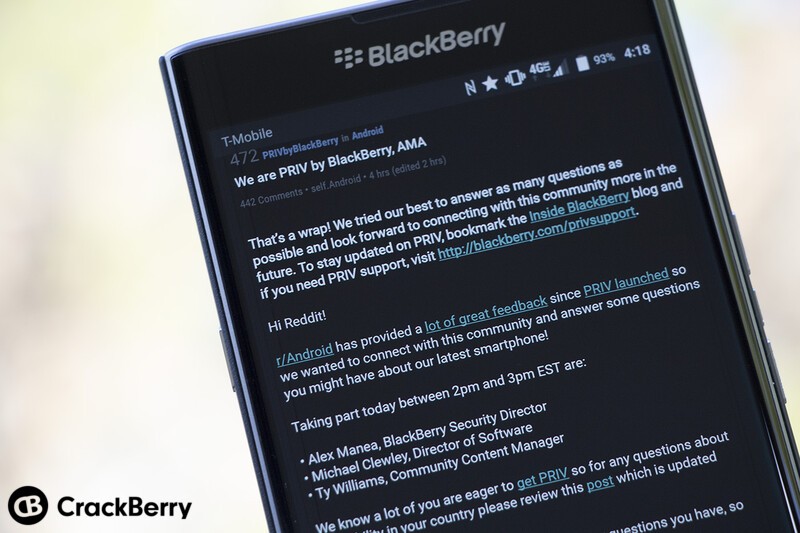 Did you miss out on BlackBerry's Priv AMA? Well, the good news is you can head on over to Reddit and check it at your leisure but, if you're not really into Reddit or just want a quick rundown of some of the most interesting questions that cropped up, we got you covered. We've dug out six of the what we feel are larger highlights, so you don't have to go digging through it all.

Seems BlackBerry Blend and whether or not it would arrive for the Priv was on the minds of many. After the arguably somewhat hazy answer had been laid out, many folks followed behind to tell BlackBerry how important it was that they bring this feature to the Priv. I especially enjoyed this follow-up comment from benjaminnyc and answer from salen. because as we all know, things are always subject to change.

The only real problem with this answer is that it leaves the onus of finding one on end-users, and that can feel like a compromise to some as it was preloaded on BlackBerry 10 plus, some simply find it frustrating to navigate Google Play and find one that works just right for them. But again, BlackBerry is open to ideas. Goes back to that whole 'subject to change' thing.

Does everyone remember how bare bones BlackBerry 10 was when it was released? And how BlackBerry slowly but surely added features to it as the OS grew? Well, it's the same thing for the Priv. As BlackBerry continues to work on the device and essentially the OS, new things are going to be added, and that includes 'old favorites' from BlackBerry 10.

Sure, we'd all like to have seen everything implemented from the get-go but that's just not how things work all the time. Priv owners will have a lot to look forward as new things get added as BlackBerry goes along and trust me when I say this, BlackBerry is listening to feedback about how to make Priv better and what folks what to see in the device through future software updates.

I know, I know. You've heard that before, and now we're all slightly jaded because the stuff we've asked for before has never appeared, but we can't have everything we want all the time. But again, BlackBerry is listening, and when it makes sense and is possible for requested features to be added, they'll carefully be considering them.

This is something I was pretty interested in knowing myself. Granted, I'm sure not many have even thought about Apt-X, but it does make a difference when listening to music through Bluetooth. In layman's terms, Apt-X enables CD-like quality wireless audio because it solves the problem of sending the full music bandwidth over Bluetooth.

It was present in previous BlackBerry 10 devices, so those who are aware of its benefits have come to expect it in other BlackBerry smartphones as well. Sadly, it's not the Priv right now but as noted, it's on the roadmap to be added. Maybe that's why Bluetooth volume seems low on Priv now? Seems plausible. Folks are used to using Apt-X with some likely not even knowing it existed.

Seems this answer upset some folks but for those of you out there who listen to the BerryFlow podcast, you know this has been discussed before. It comes down to the fact that BlackBerry, unfortunately, can't control everything on Android and because of that, they've had to let some things go. On BlackBerry 10, they controlled the whole OS from the ground up and on Android, that's simply no longer the case. A lot of stuff they can control while other things, they really can't dig into because of the nature of the OS and API's available to manipulate such things. It's unfortunate, but I'm sure BlackBerry is working around those issues when and where they can.

Someone on Twitter the other day told me one reason they weren't going to buy a Priv was because BlackBerry hasn't committed to releasing Marshmallow. Seems to me they have committed multiple times now to releasing it when they have all their ducks in a row and this only adds to that. Sure, they haven't given a definitive date for release but I'm not sure that qualifies as them 'not committing'. At this point, they've stated they'll be releasing Marshmallow when it's ready for the Priv so many times now that it would be hugely damaging for them to not do so, and I'm sure BlackBerry is aware that that's not the kind of attention they need right now. So, again, no date for Marshmallow release but to me they've certainly committed to releasing it.

So there you have it. Six things I found interesting within the AMA. Have you looked through the AMA yet? If so, let me know in the comments what you thought was interesting or noteworthy. One other thing I want to mention was how hyped some folks got for this Reddit in thinking BlackBerry was going to answer every single question thrown at them. This was a Priv AMA, not really a BlackBerry as a company AMA so of course some questions did go unanswered if they weren't directly related to Priv. I still appreciate the time Alex Manea, Michael Clewley and Ty Williams took to answer these questions because as we know it, this sort of thing wouldn't have happened with shall we say, the old BlackBerry.