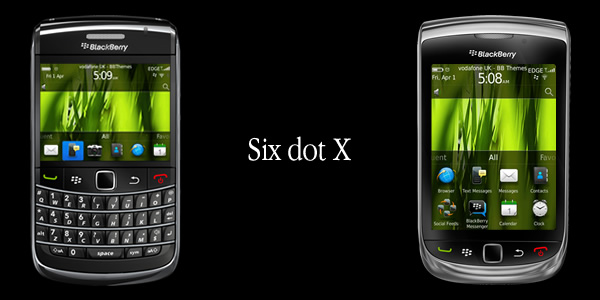 Thursday saw some exciting leaks as BlackBerry OS 6.1.0.44 was leaked online. Now, this may not mean much for you if you don't have a Torch 2 9850 or Bold Touch 9930 (because as you know, they're unreleased as of now and technically just rumored to exist) but some of the elements of this leak have proven to be useful. Not only were some of the native apps extracted, but the actual icons from the OS are now available if you know where to get them.

Now, while you may not be able to have OS 6.1 yet on your device, BBThemes has made it so it at least looks like you do! Burning the midnight oil last night, they have now released Six dot X, the closest thing to BlackBerry OS 6.1 you can have on your device at this time. Combining the actual icons from the leaked OS, not replicas, and the BB6 interface, this is the first theme of its kind and it looks so nice on my Torch! The theme runs smoothly and is very responsive and quick. If you're anxiously waiting for OS 6.1, this may help tide you over for a bit. Currently Six dot X is available for all BlackBerry smartphones running BB6 (9800, 9780, 9700, 9670, 9650, 93xx and 91xx) with OS 5.0 devices coming in the very near future. You can pick this theme up for $1.99. Heck, maybe you can fool your friends into thinking you have OS 6.1 installed while you're at it! **Update: You can now pick this up for your 9700, 9650, 9630, and 8900 on OS5. **
For more information/screenshots and to purchase Six dot x