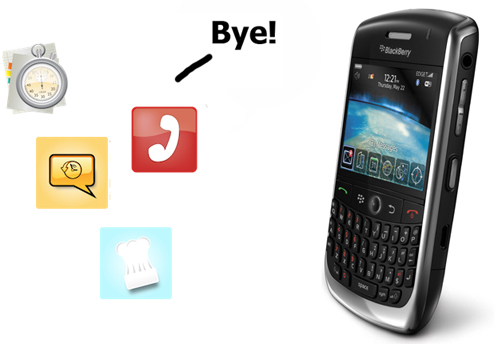 It’s a sad day when someone says goodbye. Last week, I was informed by SimpleLeap Software that they were leaving the BlackBerry community. On November 29th was made official. We have reviewed all of their BlackBerry applications in the past; Cram, Appetite, TalkLater and Call Client. I have always been a huge fan of their work and this did come as a shock to me. I can honestly say that I will miss them and the applications they have brought us. Want to know the reason? What will be the fate of their BlackBerry applications? Read the press release after the jump for more information.

"We are a small two person shop with one developer and one designer/marketer and it has become quite a task to keep our offerings current on multiple platforms. Our BlackBerry users would never understand how much we really appreciate them and how much they have made us a better company and me a better developer and I thank everyone who has supported us through this time greatly. This move simply gives us the opportunity to better focus on executing our goals on the Mac and iPhone platform." says developer Patrick Chukwura.

SimpleLeap Software will announce the news to their customers via email, their company blog (www.simpleleap.com/blog), and their company social network pages. Each app's latest download files and support documentation will remain available for up to a six months on SimpleLeap's website until May 01, 2010. SimpleLeap intends on selling two of their apps, Appetite and TalkLater, to a company that will commit to updating and expanding the capabilities of these apps. The details of the sale of these apps will be released at a later date.