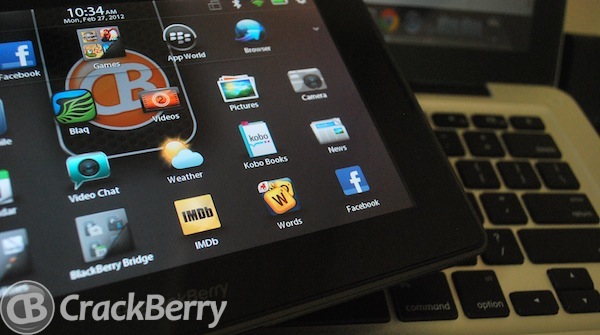 When it comes to sideloading Android apps on your BlackBerry PlayBook, using a Windows PC has pretty much been the way to go. Sideloading is the process of getting PlayBook apps (which carry the .BAR format) onto your tablet without the use of BlackBerry App World. Well loading up BAR files from your Mac isn't quite so hard either. Originally, you had to install the PlayBook SDK on your Mac (which was pretty annoying) to have the ability to load up BAR files on your PlayBook. Well thankfully that isn't the case anymore and sideloading apps from your Mac just takes a few steps. You'll need to download the PlayBook Tools, a BAR file or two and know how to use Terminal. It may take a few minutes the first time you have a go at it, but after that you'll be able to load up files in a under a minute. Keep reading for the full tutorial on just how to get this done.

Update: If you don't want to do things the hard(er) way, you can always sideload to your device using this Google Chrome extension.

So that's all there is to it. As we said earlier, after the initial setup, loading up Android apps on your PlayBook from your Mac takes just a few minutes. You can load great apps like Kindle, Words With Friends, Google Maps and even Skype on your BlackBerry PlayBook. Head to the forums to track down some BAR files for these and more.

Also be sure to hit up our BlackBerry PlayBook forums for more great tutorials and discussion. You can find help with anything you'll need to do on your PlayBook and may learn a thing or two along the way. Thanks to @mattyg for the tip!

Get Help and Discuss more in the BlackBerry PlayBook Forums