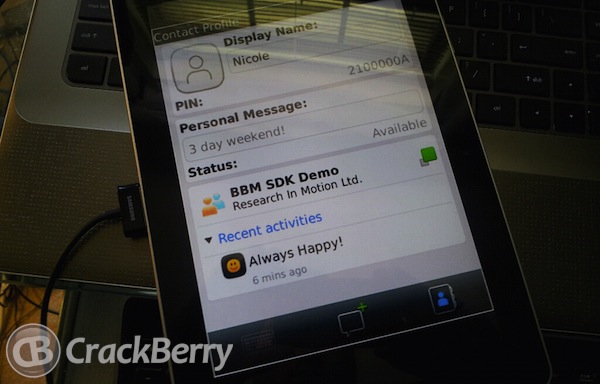 Earlier this week Kevin ran an informal Twitter poll asking a question that has been on CrackBerry Nation's mind for a while. Should RIM stick with its walled garden approach and force people to buy a BlackBerry handheld if they want to use the awesomeness that is BBM? Or should they open up and port the app to Android and iOS?

Reading through the replies is pretty interesting. People definitely want to see RIM launch BBM on other devices, mostly so they can chat with their friends in other mobile camps. BBM group support is seen as critical. But at the same time, people think that RIM will be driving a nail into its own coffin if they open up BBM.

I think it's time we had a worthwhile discussion about this. It's easy to see how customers absolutely want RIM to open up BBM. These are people who love using the best mobile instant messaging tool on the planet, and feel bad for their friends who don't have it. They want to stay connected.

So if RIM believes that doing what's best for customers is what matters, it should port the app to Android and iOS.

But at the same time, a move like this would surely get elevated to a board of directors discussion. I expect that Thorsten would have to buy into the idea and sell it to the board. The board has a fiduciary duty to shareholders, so the argument would only pass if RIM and its board believed that opening BBM was in the best interest of the company's financial future.

When discussing this in the past, on the CrackBerry Podcast, I expressed my opinion on the matter. I said that I thought RIM should, at the very least, be doing all of the work required to support BBM on other platforms. They just don't necessarily need to go public with their work until they pull the trigger on a launch. Because, one day, they may decide they absolutely NEED to be on other platforms. And based on RIM's history of executing over the last 3 years, it would take them forever to get around to launching. So they need to get the work done now, and be ready to move fast should they decide to open up BBM.

Besides doing the work "just in case", should RIM open up BBM? I believe they should. I personally feel that it would be stunningly stupid not to.

But what RIM needs to do is architect a strategy that makes the benefits greater than the pain.

We've all got our own ideas on this, and I want to hear yours in the comments. Let's get a great discussion going. Maybe our ideas will help RIM see the light. Or maybe I'm dead wrong and you'll show me why.

My thoughts on why RIM can open up BBM and win: