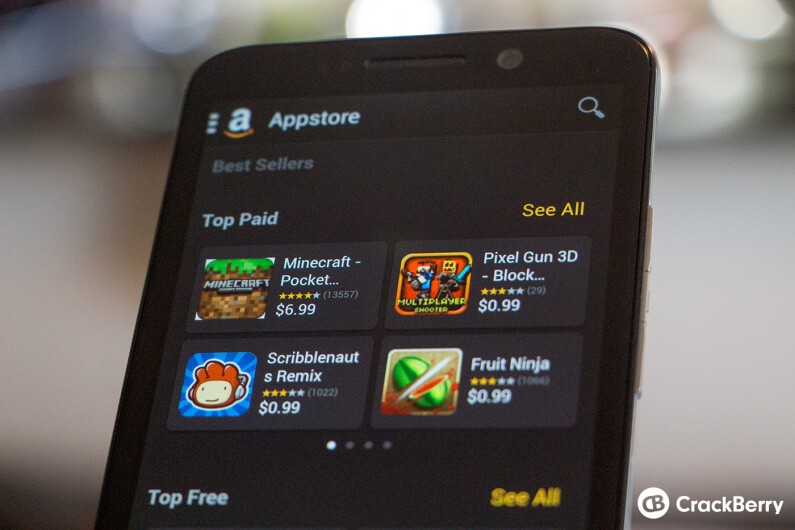 It's been a big week for BlackBerry, to say the least, and just about all of the news was positive. John Chen is definitely the real deal. Despite the surprise appearance of the new Passport and Classic (they rock!), the biggest news for me was the licensing agreement for the Amazon Appstore. And not for the reasons you think, but let's first look at the immediate benefits.

When the Passport and Classic launch in a few months, BlackBerry will basically triple the amount of official apps it has overnight, including big names like Netflix, Pandora, Spotify and Pinterest. The critics who carp about the "app gap" will be silenced and BlackBerry will have something truly awesome to boast - two robust app stores from two different platforms on one phone. Talk about a smorgasbord. I'm sure many of you already have the Amazon Appstore installed on your BlackBerry, which is as easy to accomplish as it is on any Android device. No special handling required. So why is this news a big deal?

For starters, Amazon's Appstore will come preinstalled on all upcoming BlackBerry phones, allowing even the least tech savvy users to have full and easy access. As it stands today, Android compatibility is still elusive for many mainstream consumers. But we could just be scratching the surface and this could go well beyond apps, and that's why this news is so compelling. The licensing agreement alone will help BlackBerry's app situation and Amazon now has a second platform to promote its services. A win-win for both. Moving forward, however, there's a huge amount of potential from a broader alliance, both software and hardware related. Why stop at apps? And with BlackBerry's recently announced Project Ion initiative, a combined force could be huge (more on that in a minute).

Google's I/O Developers' Conference next week will undoubtedly be a showcase for Android Wear (Google's specialized operating system for wearables), and following Apple's iWatch debut this fall, smartwatches will likely become the "next big thing". Just having a great smartphone might not be enough in 2015; it'll need a sidekick. This is a prime opportunity for BlackBerry and Amazon to collaborate on a smartwatch. It might not make sense for either to pursue this independently, but together they have the resources and engineers to make it feasible. Imagine BBM and Amazon's new Firefly feature on your wrist… How cool is that? And it wouldn't have to stop at wearables. BlackBerry hasn't been able to justify a new tablet after its struggles with the Playbook, which was a solid product nonetheless. Amazon's Kindle Fire tablets have gained some traction, but haven't seen the success of the iPad or top Androids. Combine QNX and class leading security with consumer-centric software and services, and true greatness could emerge. It wouldn't be a Playbook 2 or another Kindle Fire, but a separate beast altogether that showcases the best of both companies. When playing with giants like Apple and Google, a strategic alliance could be a winning strategy.

BlackBerry is planning to capitalize on the "Internet of Things"

Back to Project Ion. BlackBerry is planning to capitalize on the "Internet of Things" and as more of what we use day-to-day become internet accessible, from cars to watches to refrigerators to thermostats, centralized frameworks will be needed to manage all of the data. QNX is already powering many of these devices, so BlackBerry is in an excellent position. Although the (initial) plan is to focus on enterprise, the vast majority of "connected things" will be consumer oriented and that's where Amazon can be a strategic partner. Not to mention that Amazon is a major enterprise itself and Project Ion could help revolutionize the way it manages its warehouses and more. This is the same company pushing for connected delivery drones, after all. Smartwatches, tablets and phones are all part of the "Internet of Things", and collaborative efforts could be a real boon for both companies. It's still in the early stages and it's a new market, but the potential is real and BlackBerry plans to have things in place by early 2015.

I just want to be clear. I'm not suggesting that BlackBerry and Amazon merge, but rather collaborate on a handful of projects that could inject some steroids into both company's products and services (while remaining fully independent). I understand that many of you feel that the Amazon Appstore agreement will be a disincentive for native developers, but moves like this are vital to the bigger picture. John Chen isn't afraid to make hard decisions and think outside the box, and perhaps this is just the beginning of bigger things to come.

So what do you all think? Should BlackBerry and Amazon be working together on more than just apps?