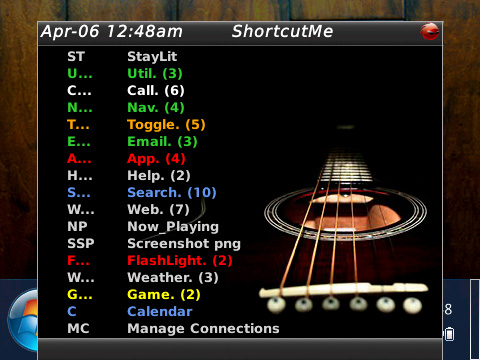 Today a new version of ShortcutMe has been released; updated to 5.3.1.0. ShortcutMe is one of many applications that provide BlackBerry users with shortcuts to their most used applications, most accessed contacts and most frequent commands. From that same list of similar applications, it’s one of a small few that do a fantastic job of living up to the demands set upon them. No matter how many times I’ve taken a look at ShortcutMe I am impressed by both the vast number of options and shortcuts that you can manage and how easy it actually is to use the application. What good would a short cut application be if it was difficult to use? If you would like, you can read the original review of ShortcutMe here.

I know I’ve said it before, but just imagine having access to not one but three applications on each convenience key (6 in total, for those who hate math). Since switching to my Torch months ago, I struggled with using a single convenience key. ShortcutMe’s feature list is long as it is but let’s see what’s new.