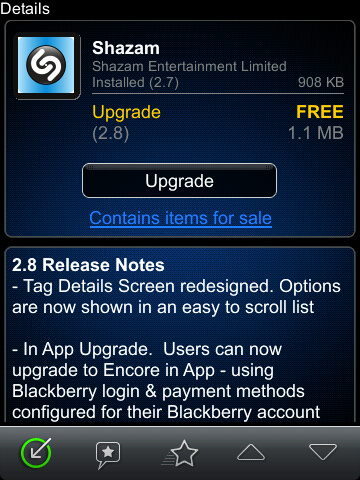 Popular music discovery app Shazam was just updated to v2.8.0 via BlackBerry App World. This update (from v2.7.0) brings with it the ability to upgrade to Shazam Encore with an in-app purchase as well as improvements to and redesign of the tag screen.

If you are unfamiliar with Shazam, it's an application for discovering, buying, and sharing music. Say you hear a song playing, and you have no idea what it is or what band it is. Open up Shazam and let it listen, and it will identify the song for you. From there you can purchase the song, share tags with friends, read reviews and much more. It's a really popular app and compatible with most BlackBerry smartphones in most countries. Shazam is free to download but the free version limits the number of songs you can identify per month to five.