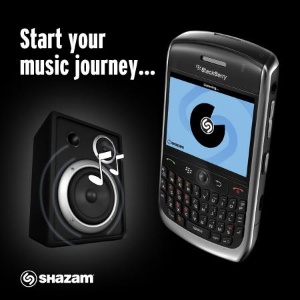 With the launch of BlackBerry App World, many users were surprised when they were able to login that one of the most wanted applications for BlackBerry was indeed now available for download.

That's right, Shazam has gone live in what appears to be beta form on BlackBerry devices, sadly it does not seem 100% compatible with all devices, with the Storm getting the regular half screen treatment we have seen from other applications. In any event I'm sure Shazam will be working on that and extending their reach to more then just the BlackBerry App World as well, as you all know by now BlackBerry App World is well..not so worldly as it currently only supports the US, Canada and the UK, Get Crackin on that RIM if you're serious about making App World work. Full Shazam press release after the jump.

Shazam on BlackBerry will include:


“As the global popularity and demand of Shazam continues to expand, we are extremely pleased to deliver a featured application on BlackBerry - one of the most ubiquitous mobile platforms in the world,” said Andrew Fisher, CEO of Shazam. “With Shazam now available on BlackBerry smartphones, users will gain access to a truly unique and enhanced music journey that will change the way music lovers experience mobile music.”

Shazam allows users to identify music by simply holding a mobile handset to a song as it’s playing. Shazam identifies and provides information to the user about the track, artist and album from its ever-expanding music database; currently consisting of over 8 million tracks, including the largest collection of undiscovered music and pre-release tracks. Since September 2008, Shazam has enjoyed a tremendous surge in popularity around the world, growing its user base from 20 to 35 million with more than one million tracks tagged each day.

“We continue to see increasing demand for multimedia applications and services from our customers and we believe Shazam adds multidimensional value to the mobile music experience for BlackBerry smartphone users,” said Jeff McDowell, Vice President, Global Alliances at Research In Motion. “Shazam’s unique features are perfectly suited to the BlackBerry platform. We are very pleased to prominently feature this innovative application in BlackBerry App World.”

BlackBerry smartphone users who download the Shazam application between 1st of April and 31st of May will be given the option to try out the full-featured version on a 60 day promotional basis*; if they want to keep and continue to use Shazam they can pay anytime during the promotion or at the end of the period with a one-off fee of $4.99 / £5.00 / €4.99 depending on location.

Alternatively, if users prefer they can continue Shazaming for free on a limited** feature and tagging basis - available at the end of the promotional period.

* 60 day promotional period starts from the date of user setup. Setup needs to occur within the stated period of the offer.
** Limited means reduced functionality to that in the feature-enhanced version and restricted tagging usage.

About Shazam Entertainment
Shazam is the world’s leading mobile music discovery application - enabling consumers to experience and share music with others across mobile devices and the internet. Since its launch as the first mobile-specific service to help users discover new music six years ago, Shazam has created a new way for users to connect to each other through their music tastes and preferences.

Headquartered in London England, Shazam’s solutions enhance the music strategies of more than 75 carriers across 60 markets globally, including AT&T, T-Mobile and Vodafone. It has deployed across multiple platforms such as Apple, Android, Symbian and Java; and has a customer base of over 35 million.

The Shazam iD Chart, generated by the company’s mobile music recognition service, is constantly referenced by the music industry as a true indicator of market interest in pre-release material and a monitor of the hit potential of a track or artist.

Shazam’s successes have been recognised through numerous awards, including the Mobile Entertainment Award for Best Music Service Provider.

The BlackBerry and RIM families of related marks, images and symbols are the exclusive properties and trademarks of Research In Motion Limited. RIM assumes no obligations or liability and makes no representation, warranty, endorsement or guarantee in relation to any aspect of any third party products or services.
NEVER GONNA GIVE YOU UP NEVER GONNA LET YOU DOWN