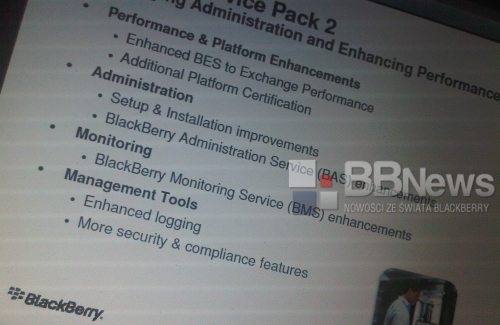 Just this week RIM released maintenance releases for BES 5.0 SP1 for both the Microsoft Exchange and Lotus Domino platforms. Both release have a laundry list of 5 pages of notes detailing the fixed issues. Now we have a news from BBNews.pl of details of the upcoming Service Pack (SP2) that many BES admins have been waiting for.  Originally the expeted release target was July, and it now may be pushed back to September.

Not that BES 5.0 has been unstable or plagued by problems however it like all software is not immune from problems. Many of the advancements in SP2 will offer a nicer user experience for both the BES Admin and the end BlackBerry user. One of these enhancements will be additional supported web browsers for the BES Console and the Web Desktop Manger.

The Web Desktop Manager is a very cool feature that was included with BES 5.0 allowing end users to backup, restore, change sync settings etc. without needing to install a desktop software on the PC. If you are as tired as I am of those annoying popups on your PC informing you that there is an updated version of desktop manager, than not having any software loaded on the PC is a godsend.

Currently the web console is only compatible with IE 6 & 7, I don't even have to get into why this is unacceptable so I will just say that IE 8, Firefox 3.6, Chrome 4.0 and Safari 4.0 for Mac are all now supported. Ya!!! Running IE 8 in compatibility mode has not been the most ideal of situations. In fact BES is one of the only reasons I need IE as 99% of all my web work is now done in Chrome. For full details on what BBNews.pl have uncovered pop on over to their site.