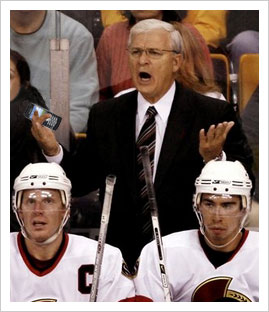 What a hockey game we were treated to on Saturday! For those of you that are not interested in hockey, you can stop reading HERE. :)

The Senators clinched a birth into the Stanley Cup Finals with a 3-2 overtime win in Buffalo. What a thriller! Speaking on behalf of all Canadians (with the exception of Torontonians), GO SENS GO!

During post-game interviews on Saturday, Sens coach Bryan Murray admitted he slipped a new team member into the lineup without anyone noticing.

'Yes, it's true' Murray said. 'I was surprised no one noticed. I brought my BlackBerry Pearl onto the bench today and used it to reference game plans and strategy in my email. It came in handy for sure.'

Murray was also heard to say 'I can't wait to try the new 'curve'. Looks like cutting edge technology'.

While this interview was going on, Sens Captain Daniel Alfredsson was seen shaking his head and quickly left the room. 'No comment' was all we heard from the game winning goal scorer.