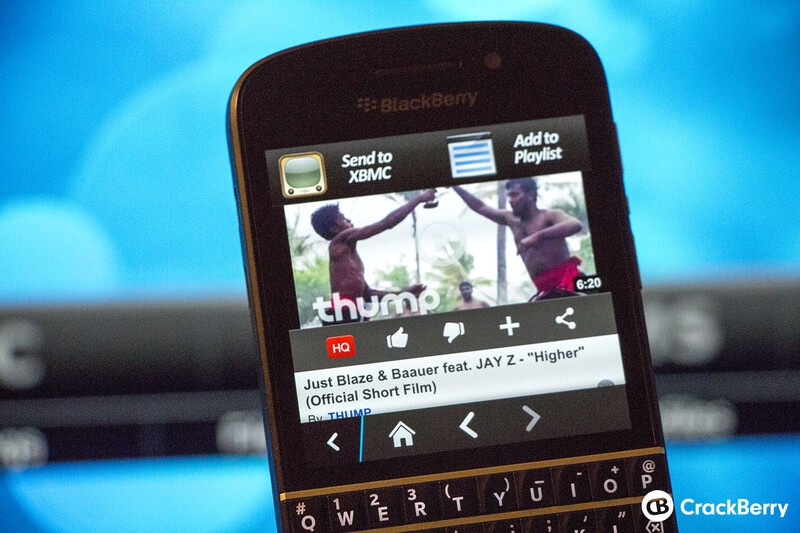 Although I'm not sure why, because I never really watch TV, I do happen to have a television in my bedroom with a media center set up on it. The media center component is powered by XBMC and sometimes late at night while lying in bed I'll use my BlackBerry 10 device to dig through some websites. Most people do that right? The old joke states you go to bed and then spend another hour on your phone.

Sometimes though, while digging through those sites, I'll come across some video that would be better suited for viewing on the big screen and more often that not, those videos tend to be YouTube videos. Possibly channeling my inner laziness or relating to my situation, ShaoSoft has come up with 'Send to XBMC for YouTube', which is an app that allows you to send YouTube videos from your device to XBMC.

The app is simple to use and straightforward to set up. Simply fire it up, load up the IP address and port for your XBMC install and you're up and running. You can then use the sharing menu to send any YouTube videos you're watching directly to XBMC. Plus, you can also set up playlists if you wish so that if you have several YouTube videos you want to watch, you can have them play through easily. It's pretty great if what you want to watch is spanned across several uploads or for example, you want to run a playlist of music videos.

I realize not everyone is going to use an app like this, after all there is several XBMC remotes available that arguably do more but Send to XBMC for YouTube makes a great companion app to those remotes available as well. The app is available as a paid app and pricing is set at $.99, which is cheap enough to not really worry about not using it often though, given my laziness and terrible sleeping patterns, I use it a TON.