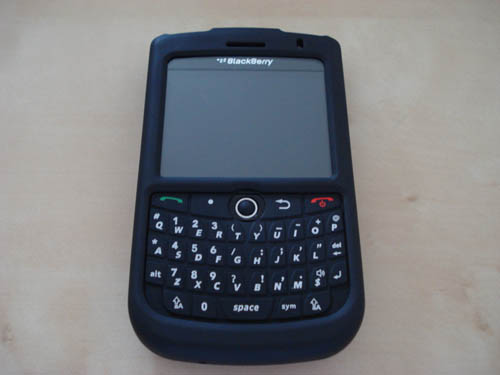 [ This post comes via our Community Review forums from member Stang68. Post your review and if we promote it to the blogs you'll receive a coupon for free accessories or apps from ShopCrackBerry.com. ]

I have been using the Seidio Innocase 360 for the Tour (along with the holster for it) for the past few days and would like to let all of you know what I think of it!

The design of the Innocase 360 is very similar to the Innocase II that Seidio ships for the Tour. They are both very slim and do not add much bulk. The differences are as follows: On the 360, there is a bar that goes across the middle of the phone (like the Innocase I). This makes it tough to scroll at first but after a day of use you get used to it and now my thumb "remembers" how to use the trackball with the cover on.

Also, the 360 snaps on with a front and back piece, as opposed to a slide design like the Innocase II (which I prefer because there is less chance of the case flying off when dropped). The snap, though, was the best I have seen on a Seidio case. There were no rough edges and it was actually not a struggle to take apart...very easy in fact!

The 360 case has the same "rubberized paint" that is on all of the other Innocases and really does make it feel so much better than one of those silicon skins that are impossible to take out of your pocket.

Seidio really named the Innocase 360 well because it really does give your Blackberry all-around protection. The design of the case is very nice. Now I will go into further detail.
The people that say the Innocases add too much bulk to the phone do not know what they are talking about. Sure, it makes it a little bigger, but not by much. The plastic of the case is MAYBE 1mm thick. I actually prefer holding my Tour in one of the Innocases as opposed to naked because they provide a better grip on the phone.

The keyboard on the 360 case does not hinder at all...well, for the most part. The one thing that I did not find 100% satisfactory with the keyboard is the fact that it does not allow the keys to light up to their full potential. This is only minor because you can still see them, just not as easily as if the cover was off. I guess Seidio did the best they could with it though, I mean, they did get some light through! Check out the picture comparison below:

The Innocase 360 comes with a plastic screen protector built-in. This is a very nice features because, again, you have FULL protection for you Tour! The plastic cover did not hinder the look of the screen at all. I really loved having the extra protection on my screen, not having to worry about putting my Tour in my pocket with some coins. At first there was a few bubbles on the screen but that is apparently normal, as the instructions say. After a day they all went away and never came back, even when I took the case off at night.

One of the qualms people have had with the Innocase 360 is that it does not fit into the charging cradle for the Tour...but come on, people, NO CASE fits into the charging cradle. A skin, a hard case, a feather case, whatever (even some of those Phantom Skin/BSE skins are a tight fit!) you have, you're going to have to take it off to charge it in the charging cradle/pod. On a side note, I have been informed that Seidio is going to be releasing a charging cradle for use with the Tour WHILE the Innocase is still on it...they have one like that for the Storm, 8900, etc. Another qualm they have is that the speaker is partly covered by the case. It technically is, but I did not hear any difference with my speakerphone. I really do not think that is a negative aspect at all.

The Innocase Swivel Holster for the Tour is just like all of the swivel holsters Seidio makes...amazing! I have used many Seidio holsters and this one is probably the best because of the new locking mechanism on it, which can be seen in the pictures. When you want it to be locked, just slide the little clip at the top up and it WILL NOT open. It is a little tougher to lock, but I think this is a good thing so that it does not lock by mistake. It is easier to unlock but no to the point where it will unlock by itself...trust me, this thing will not unlock unless you want it to!

The holster is a screen-facing-in type which means the screen will be protected when it is on your hip. There is a nice felt that lines the inside and for the people that think it rips and fades over time, you're wrong. I had an Innocase clip for my old 8330 which my brother is now using and it still looks good. Nothing has ripped; maybe there is a little fade on the edges.

I have had that holster for a year and a half and it still clicks the phone into place as well as it did on day one and I do not see how the Innocase Swivel Holster for the Tour will be any different!

I recommend the Innocase 360 for anyone who needs all-around protection for their Tour. It really does provide amazing protection; I felt totally safe bringing my Tour to a club, a bar, a party, the store, the gym (everywhere) when it was in the Innocase 360. However, it does take away from the beauty that is the Tour, which is why I probably will only use it when I think I will be getting a little rough. When I am not, I will be using the Innocase II case, because that provides great protection, as well. I plan on going camping in a few weeks and am totally going to bring the Innocase 360 for that weekend. I am happy to have both and will definitely be using both. You really cannot go wrong with a case from Seidio.