"The Seidio Charging Vault has proved to me its worth as an external battery. Without this backup power supply, I'd probably still be wandering the Las Vegas strip, looking for a familiar face." 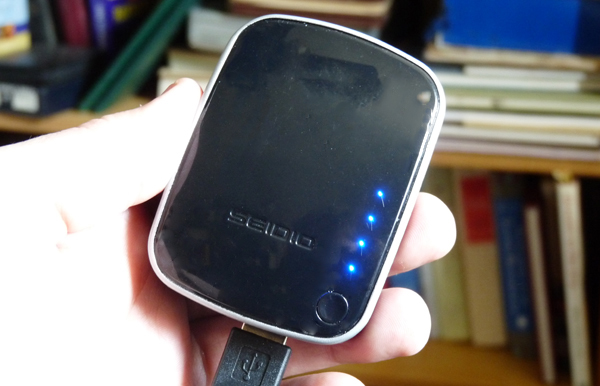 At CES2012, we saw a good deal of mobile charging solutions; quite a few companies had portable power packs on display. From among this diverse crowd of options - and believe me, I've tried a number of these charging solutions - the Seidio Charging Vault stands out from the rest. The battery pack features not one but two UBS charging ports. In the Charging Vault Kit, Seidio has kindly included a retractable USB cable with multiple tips: microUSB and a 30-pin connector for iOS devices. Most importantly, the Charging Vault proved its importance by saving my BlackBerry Torch 9860 on day one of my trip to Las Vegas. Without this backup power supply, I'd probably still be wandering the strip, looking for a familiar face.

The included retractable charging cable is a nice feature.

The Seidio Charging Vault holds a 2200 mAh battery in a small convenient package about the size of half a deck of cards, though a bit thicker. The battery pack features two standard USB ports, so you're not limited to the retractable cable included in the packaging. Any charging cable that uses a standard USB port can be used; the Charging Vault can even charge my Aftershokz bone conducting headphones. In fact, two devices can charge simultaneously, making this an invaluable on-the-road device.

Folding prongs make for a much more comfortable ride in a pocket or purse.

When recharging its own battery, the Seidio Charging Vault plugs into any standard US power outlet using a pair of flip-down prongs. The prongs fold neatly back into the device when not in use, making the Charging Vault fit comfortably in a pants pocket (I suppose a purse as well). When you're charging your Smartphone, you're probably going to put it in your pocket while it does so. The smooth, rounded edges of the Charging Vault ensure that no sharp or pointy bits are jabbing you in the leg as you walk.

In all the mobile charging solutions I saw at CES, I couldn’t find one that had so much battery power in such a small package with so many supported devices as the Seidio Charging Vault. It is a highly versatile device that will have no problems recharging the vast majority of mobile devices and Smartphones.