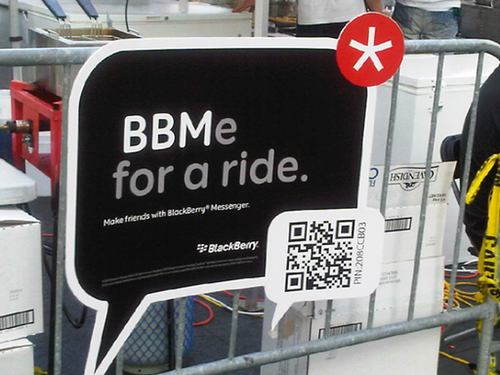 It seems as though Research In Motion has stepped up their game a bit when it comes to uses and implementations of barcodes. As some of you know, you can add contacts and scan compatible barcodes with the latest BlackBerry Messenger. Research In Motion appears to be putting that offering to work for them by means of promotions and advertising. Free BlackBerry smartphones, free VIP sections at concerts and more. This could turn out to be quite the marketing effort, if it shows up on a larger scale. A interesting read from the CrackBerry forums tells the full details.

So yesterday I took the family to a Teeny bopper concert (Wham Bam) in Toronto. I wasn't really looking forward to it, as most of the acts I didn't like very much. I do listen to current music, but this wasn't my thing.

Now, anyone that knows me, knows that I'm a HUGE BlackBerry fan-boy. I have converted many people from dumb-phones to BB's, and enjoy the phones tremendously. I beta test for BB (beta zone) and always buy the newest handsets...my entire family has a BB, and many of my friends do as well.

So anyway, as we entered the amphitheater I noticed a BBM chat bubble about 20"x20' that said "add me for better seats" and had a barcode to scan. I stopped, and scanned the barcode. My family turned back and asked me WTF I was doing We found our seats, and I had to run to the bathroom. On my way, I noticed another sign. Different message, different PIN and barcode. I scanned that one too. I was then on a mission to find any and all of these signs throughout the entire place. I found a total of 5 different PIN/barcodes (there were more signs, but only 5 PIN in total) and I added em all. I get back to the family, and tell my oldest son to add em all too.

About an hour later, these contacts add me and send me a message. Each message described a different "perk". The idea was to add all the contacts, get them to add you to BBM, then track them down to win the prize.

The 5 stations I identified were:

So, now I'm on a mission (Uber geek I know). I find the sunblock and battery girl, we chat, but they are VERY secretive. I manage to find the ticket girl. She hands me 2 tickets for the front row! SWEET! My son and wife find the VIP chick. They get 2 VIP passes and hit the food/bar. While in the VIP lounge, my son sees another poster. He scans that one. A few minutes later he gets a message from this PIN. He won a BlackBerry 9700! awesome!

So we put the kids in the front row seats (wife and I had no interest in them )
The wife and I went to the VIP and had some food and drink. All in all we had a great day. Got a ton of free stuff, and met some really cool BB people. I found this kind of thing very interesting. It was marketing, but only for BB people, as the average person doesn't even know about barcode scanning etc. It was more of a rewards based system, for BB users. Never seen anything like it, but too cool!


And that is that folks. So, the next time if you are out. If you happen to see a BlackBerry barcode anywhere especially at events, you may wish to scan it. You could end up with some VIP stuff. Just, don't blame me if it turns out to be nothing. Thanks to Mark_PPG for sending this stuff into us and posting in the forums.
They say it's for science