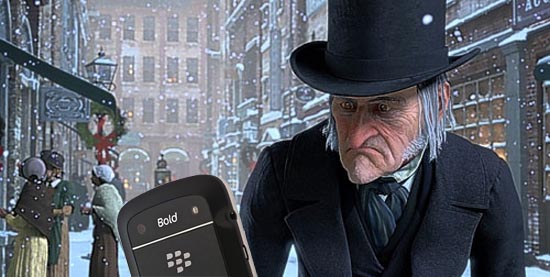 So in the past, coincidently at this time of year, I have put together guides to applications that help you survive the holiday season, as well as a list of applications that Santa might use. I may do so again this year, but I wanted to take a different approach first. Something I thought was more important and I’m going once again call upon an old slogan that Canadian Tire used years ago: “Give like Santa, Save like Scrooge”. Yes, I know I’ve more than likely used that before in another article, maybe even shouting it aloud in a store or two (or three)– but it holds more value than ever before. If you are truly going to survive the holidays, you need to do so with as much money as possible. If you don’t, you’ll be saying more than “humbug!” when you get your credit card statement in January.

What I’m saying is embrace the Holiday spirit, with a Scrooge-budget in mind. Be a merry miser who is mindful of money. It’s not always about spending top dollar to show your love this holiday season; unless you want to give me money this year that I can put towards a BlackBerry 10 superphone, I wouldn’t mind that at all. When you’re finished writing out a cheque to me, you check out these applications. That or you can be visited by three ghosts, up to you.

Now I did take cost into consideration with this list, but sometimes it takes a bit of money to save a lot of money.

You don’t want to have to pay for everyone when you go out for dinner do you? Lil’ Tiny Tim can fend for himself can’t he? Just find a restaurant where kids can eat free! When going out to dinner with friends, we would pay for it entirely and the other people would toss some money our way to cover their part. It’s easy and doesn’t create a potentially awkward moment. You could Scrooge it up a bit with an application like EZ Bill Splitter. The application helps you calculate who owes what and what their portion of the taxes and tip should be. You don’t want to pay for more than what you had to anyway do you?

Alright, you’re going to finally take part in the gift giving madness, but you’re not going to break the bank doing it! After all, it’s the thought that counts, not the price tag. With that in mind, toothpaste for everyone! Mint flavoured even; like a candy cane in paste form. Christmas Budget is a shopping list with some oomph. Through it, you can set and track budgets for groups (family, friends, coworkers, etc). At a quick glance, you can see how many gifts you have purchased for each group, as well as the budget (and how much you have spent). Say if someone really made you say “Bah, humbug” – you can return the gift and delete it on the application. It could be YOUR very own naughty or nice list, don’t you think?

Scrooge could save himself a few dollars and use the Mobile Checkbook application to balance his books; then he could fire that Bob Cratchit altogether. He wouldn’t even need to hunch over the books himself. He could enjoy a leisurely stroll through the street, sneering at those full of fa la la la la. All the while he can manage his accounts, record transfers, withdrawals and deposits (lots and lots of deposits). With cloud-based backup/restore options and the ability to export transactions in XLS and QIF formats, Scrooge may be able to do away with the books. If I were him, I would pick up Mobile Checkbook immediately; Jacob Marley didn’t and look what happened to him.

If Ebenezer (or E Neezy, as he was known when he was an apprentice for Mr. Fezziwig) were alive today, I’m pretty certain he would be a coupon collector. Not necessarily to the degree that some extreme couponers are, but it would be entirely possible that he would have a binder or two full of coupons. Groupon has been a “deal of the day” website since 2008. Through it, users would be able to purchase discounted gift certificates for things to eat, buy, see and do (not necessarily in that order, mind you). E Neezy can toss the binder and install the Groupon application. He could check out the daily deals near him, buy/redeem from the BlackBerry smartphone and track info such as Groupon location and purchase/expiration date. Now, when E Neezy had the turkey delivered to the Cratchit house, he could use a Groupon to save some money!

What kind of car would Scrooge drive? Would he use a top of the line model or something more economical? Perhaps he would still drive an old clunker, since he’s too cheap to spend money on a new car. Whatever he’s driving, you know he’ll be the first (and last) to complain about gas prices. Now GasBuddy is a community of frugal fuelers that share locations with cheap gas prices. Yes, they have a BlackBerry smartphone application, so you can keep in touch with that community. With its BBM integration, you can tell your friends as well. Though I suspect that Scrooge will try to find a way to mess with everyone and put in fake pricing, so that only he could benefit. The only way he would find cheaper gas is if he siphoned it himself. Then the question of whether the Ghosts of Christmas past, present and future were real or gas fume-induced hallucinations, would be brought up.

Is Scrooge going to make sure he’s not paying too much for something? You’re damn right he is! He’s hitting the stores, he’s looking at prices. Now he could carry a pile of flyers with him OR he can make use of an application like UPC Price Check. With it, your BlackBerry can then scan standard bar codes (UPC-A, UPC-E, EAN-8 or EAN-13) and then compare with prices from Google Shopping, Amazon, Bing Shopping and Nextag. Your native browser will then open and redirect to the website you chose. The application also makes it easy to copy information to a clipboard, so you can then save it as a memo.

So even if E Neezy – sorry - Scrooge did discover the true spirit of the season; bit something tells me that old habits die hard. He’s going to spread joy, cheer and gifts, but he may still try and save money while doing so. These apps aren’t necessarily geared towards those who are greedy and stingy. They’ll also help you save money this season, so January won’t be filled with financial blues. What application are you using to save money and enjoy the season? Let us know!