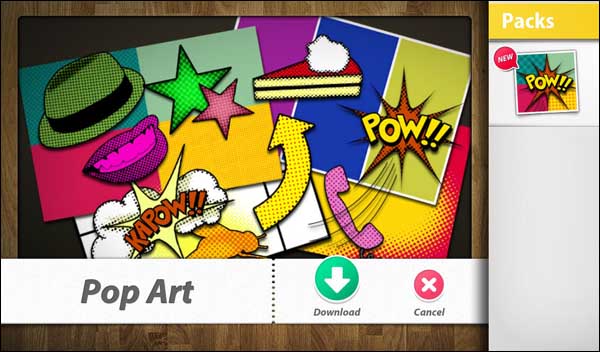 It's no secret that I love the Scrapbook app on the BlackBerry PlayBook. While the backgrounds and stickers that came with early versions were fun, I for one always hoped an update would come soon to give me more options. It took a bit of time, but Research In Motion has released the update I've been waiting for. Scrapbook 2.0 allows you to download fun new content packs from within the app. The new ones that are available now are Christmas, Travel, and The 50s. Each one comes with tons of new backgrounds and stickers for your amusement. Not feeling one of the packs? No worries, they are individual and optional to download. You can also remove packs after installation by pressing and holding the icon for the pack until the pop-up confirmation appears. RIM has also added the ability to use BlackBerry Bridge to connect Scrapbook to Facebook and for downloading the packs. Great for those times you're not near WiFi but NEED to get your Scrapbook fix.

I really like the new additions to the Scrapbook app for the PlayBook. There are still a few things on my wish list for the app, including Twitter support (but with no native Twitter app guess that won't be along any time soon), the ability to resize stickers, and the ability to edit pages after they've been saved. Obviously none of these are deal breakers, and I still use and enjoy the app, and will even more now with all the new stuff in this version. (Thanks to @RickGainsmith for alerting me on Twitter when the update hit!)