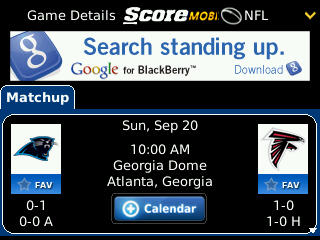 The Score has updated their Score Mobile application. Already a popular download in BlackBerry App World, the new features in version 1.2 are something that all sports fans should be able to appreciate, especially now that the fall sports season is well under way. New features include:

In addition to the new features added, The Score has also added NFL and NCAA football stats, UEFA Champions League soccer statistics for everyone. You can grab the application now via BlackBerry App World.