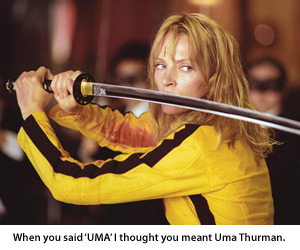 Saving money is close to the number one item on all priority lists within enterprises today and one way to save money is to cut down on the cost of calls.  BlackBerry adoption within enterprises is very high and has now become an essential part of everyday business, so there is no way that you is going to take away an employee’s BlackBerry because it will likely cost more for that employee to perform their job.  However what if you could save a lot of money on their phone calls?

That is where Universal Mobile Access (UMA) comes in.  A UMA-enabled BlackBerry has the ability to save A LOT of money and improve the whole experience as a side effect.

While this article is geared towards businesses, everyone can take advantage of this technology and save the same amount of money.

The acronym UMA has stayed the same, but the words that make it up have changed a couple of times.  First it was Unlicensed Media Access, then Unlicensed Mobile Access, and now Universal Mobile Access.  It all means the same thing at the end of the day.  UMA describes the ability of a mobile phone to switch back and forth between two kinds of networks seamlessly.  The implementation that is the most common is for a mobile phone to switch between WiFi and cellular networks seamlessly.

There are two components that allow UMA to function.  The first part is UMA equipment that your mobile provider or carrier installs.  The second component is a mobile phone that has a WiFi and cellular radio, plus embedded UMA software that allows it to switch back and forth seamlessly.  These are commonly called Dual Mode Handsets (DMH).   Figure 1 below should make it a little clearer.

With a UMA-enabled mobile phone and a carrier that supports UMA, you can see at least one clear benefit and that is one of providing better coverage.  This is because every WiFi hot spot that you can connect to essentially becomes a mini cell tower for that carrier.  For example, let’s say that you don’t get great coverage in your house.  It is very likely that you have a WiFi router installed, and so now your UMA-enabled mobile phone will get 5 bars of coverage all over your house.

That is impressive on its own, but what makes it even better is that the mobile phone can switch back and forth between the WiFi network and the cellular network completely seamlessly, with no dropped calls, pause in audio, audio skipping, or any interruption in audio whatsoever.  In addition, when you are making calls over WiFi, the call quality actually improves.

It should be noted that it is not only your voice connection that utilizes UMA, but your data connection too.  This means that your web browsing speed improves, and any third party applications that you use on your phone will speed up.

So How Do You Save Money?

I’m sure that UMA sounds impressive on a technical level, but you are still probably wondering how it saves you money.  That is the best part.

The wonderful thing about UMA happens when you make calls over WiFi.  You see, when your phone is connected to WiFi, it is still communicating with your carrier, but the communications are going over the Internet to the carrier.  The carrier has no way of knowing where in the world you are when you connect to them over WiFi.  This means that they continue to simply deduct minutes off your regular monthly plan.  If you are travelling internationally and connect to hotel WiFi, or a client’s WiFi, or airport lounge WiF, and make calls, your carrier doesn’t charge you outrages roaming fees in addition to deducting minutes.  So you immediately save on roaming fees which range from $1 a minute to $5 a minute depending on the country you are travelling in.  The bottom line is that the carrier assumes that you are in your home country when you connect to them over WiFi.

But it gets even better.  Most carriers that support UMA have unlimited calling plans for UMA.  For example T-Mobile USA has an add-on for $9.99 per month that allows you to make unlimited calls over WiFi.  You can imagine that there is some point where you could cut down your 1500 minute plan to say a 300 minute plan, pay the extra $9.99 per month, and call from anywhere in the world for free, when connected to WiFi.

What if the Hot Spot is Secured?

Each time you connect to a new WiFi hotspot, you set it up one time and the mobile phone remembers the settings.  So any encryption keys and network names are saved so that the next time you are within range, your phone will just connect seamlessly.

If the WiFi hot spot requires a login, say a hotel WiFi that needs a room number, that is not problem either.  The mobile phone simply takes you straight to that login page after you connect so you can type in your details.  Your phone should then be able to re-connect throughout the day depending on how long the time-out value is set at the hotel.

Yes UMA is secure.  The phone sets up an IPSec connection to the carrier, and when the call is switched to WiFi, it continues to use the same encryption it uses over the cellular network.  So it is actually double-encrypted.

Supporting UMA-enabled phones within an enterprise network is also safe because you can setup a VLAN that connects directly to the Internet and allows only the ports needed to establish an IPSec connection.  The enterprise UMA-enabled phone is also secure out in the field on public or private hot spots because of the double-encryption.  So nobody can listen in on your calls or see your data with a Sniffer.

Some of the carriers that support UMA are T-Mobile USA, Orange (multiple countries), and Rogers.