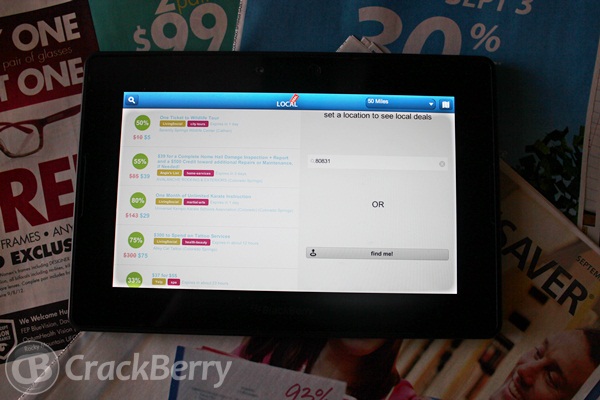 I love the new craze of mobile coupons and store deals being sent straight to my BlackBerry. With Groupon, Yelp and so many other offering these services, it can get a bit frustrating searching for the best deal. Local Deals by IML Snacks makes that option even easier for me (and the rest of you in the US and Canada).

Local Deals searches the daily deal providers (like Groupon) for all the latest and greatest savings in your area giving you the best possible chance of keeping some of that hard earned cash in your pocket. You don’t have to subscribe to all those deal sites either! Local Deals will automatically search for you without needing an account for the providers.

The participating U.S. deal sites are:

The participating Canadian deal sites are:

With this app and Key Ring Rewards on my Bold 9930, I have everything I need to score me the things I want at a price I'm willing to pay. If you’re constantly on the search for the best deal possible, you will want to give Local Deals a try for yourself!

Local Deals is available in App World for FREE. I highly recommend grabbing a copy of this app for your BlackBerry PlayBook and start saving today!