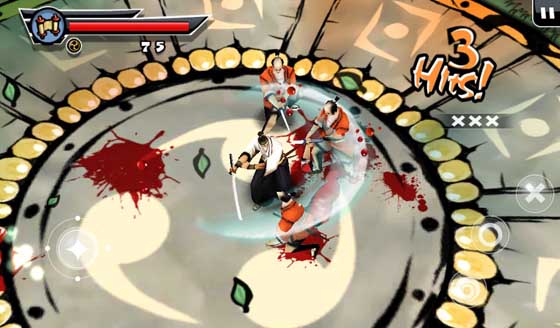 Wield the sharp edge of a katana in Samurai II: Vengeance. You are on a quest to hunt down the demon lord Orochi. Across a ravaged countryside, atop a flying fortress, even to the legendary Isle of the Dead, you must stop at nothing to claim your honor and exact vengeance on the forces of evil that plague feudal Japan.


Union has just released this game for the BlackBerry PlayBook, and it is a real treat. Visually, the graphics are great and very fitting for a game set in Japan. Comic book style cut scenes give you back story and plot for the game, and the color and sounds will transport you right inside, immersing you in the game. The controls are easy to master, and you will be slicing through opponents in no time. Save up points to upgrade your health, unlock new skills, and upgrade attack combos.

Samurai II: Vengeance plays really well on the BlackBerry PlayBook, and the only issue I have encountered is the game crashes when trying to enter the dojo. Hopefully that will be fixed in a future update. Also, be aware that if you are running the beta 2.0 OS on your PlayBook, the game is not supported. You can grab this awesome game for $4.99 in App World at the link below, and check out more screenshots after the break.