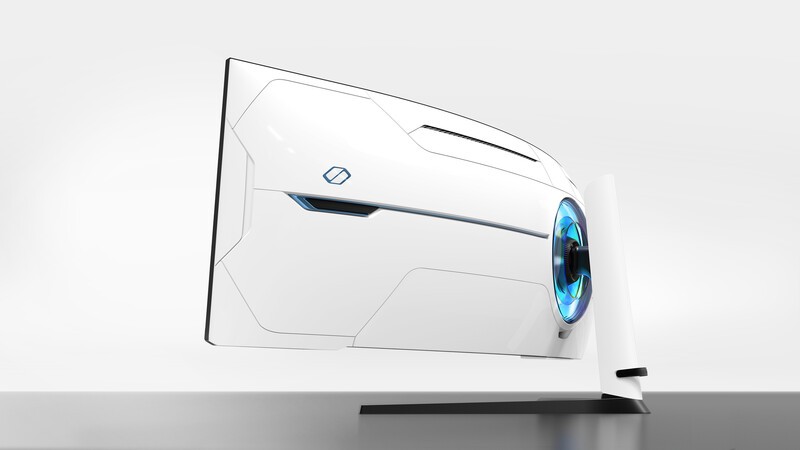 Like my pickiness with getting the exact right speakers, I'm kinda hard-headed when it comes to monitors too. For the first several years of my computing journey I just used whatever screen my laptop had, and then I added in my first external monitor: a 29" 21:9 ultrawide LCD panel from AOC. This was years ago, so while it was indeed wide as promised, it wasn't good quality. The color accuracy and mediocre backlight proved problematic with my graphic design projects for school and work, but I persisted because I'm a stubborn guy.

Several years ago I made a massive upgrade to the then-new LG 5K UltraFine monitors — two of them. They were expensive as heck, but they checked the boxes I wanted: high resolution and the most accurate color fidelity. They've served me well for years, but I've been itching for the past few years for an upgrade that hasn't existed. My biggest complaint with these otherwise awesome monitors is the bezels: with them side-by-side I have a 1-¼" black plastic gap right in the middle of my field of view. I've grown used to it, but still watched the rise of all these new 32:9 ultrawide monitors with envy.

I kept saying "not yet" because those tempting ultrawides didn't check my boxes. I could accept some loss of resolution (I don't expect an ultrawide 10K any time soon), but I need good color accuracy and a good number of pixels to feel happy. I'm willing to pay for quality, but what I wanted just didn't exist.

Samsung's finally doing it. With the new Samsung Odyssey Neo G9 my boxes are finally getting checked. It has a resolution that matches two 4K panels side-by-side at 7,680×2,160 for a 32:9 aspect ratio. It's 57" from corner to corner with a reasonable 1000R curve (a 1-meter radius), quantum mini LED display tech (a big step up from the IPS panel in my dual 5Ks), and it supports HDR 1000 so the image quality is going to be top-notch.

Seriously, all my boxes from four years ago are getting checked here:

The Odyssey Neo G9 also is the first monitor with DisplayPort 2.1, with will be necessary to drive all 16.5 million pixels at the maximum 240hz refresh rate. No word on what other inputs it may offer, but I expect it'll have a full array including Thunderbolt 4. And as this is a gaming-focused monitor Samsung isn't touting the full set of color quality specs, but if it's anything like the 49" Odyssey G9 I'd expect excellent support for the DCI, sRGB, and Adobe RGB color gamuts.

Samsung's also been mum on the price, which I think we can all expect to be somewhat painful. The older and smaller G9 retailed for $1499.99 — I wouldn't be surprised to see the Neo G9 go well over $2,000. But that's still less than my LG 5K monitors cost several years ago.

The monster Neo G9 isn't the only impressive monitor breaking cover today, with Samsung also revealing the Odyssey OLED G9. It's a touch smaller at 49 inches at a still-very-wide 32:9 aspect ratio. But what distinguishes this monitor is right there in the name: OLED. This display clocks in at 5,120x1440, making it the highest resolution QD-OLED panel Samsung has released, and the largest OLED gaming monitor that's not actually just a TV with a gaming brand slapped on it.

The OLED G9 also offers a 240hz refresh rate, HDR 400 (OLED simply can't get quite as bright as LED), and Samsung's "Smart Hub" and "Gaming Hub" services for watching video streaming services and playing cloud-based games from Xbox Cloud and NVIDIA GeForce Now without hooking up a PC or console. OLED's deep contrast and rich colors have been the dream for many years, but gamers concerns with latency were holding it back. With a 0.1ms response time that's much less of a concern with the OLED G9, though assuredly the price will be.

Funny enough, while I'm drooling over the Odyssey Neo G9, Samsung's finally releasing a monitor to rival both my old LG 5K displays and Apple's newer 5K Studio Display: the 5K-resolution 27-inch DCI-P3 ViewFinity S9. This monitor is geared towards "creative professionals such as graphic designers and photographers" who need the most accurate color representation out of their displays. These kind of specs are what drew me to the LG 5Ks years ago, and it's good to see Samsung stepping up to the plate here.

But it wouldn't be Samsung if it weren't a little extra. You can calibrate the color accuracy through the Samsung Smart Calibration app on your smartphone, which will use your phone's camera to analyze your room's ambient lighting and the output of the monitor and then adjust the display settings accordingly to ensure you have the most accurate picture. It also is equipped with speedy Thunderbolt 4, and is outfitted with Samsung's 4K SlimFit webcam. Take that, Apple.