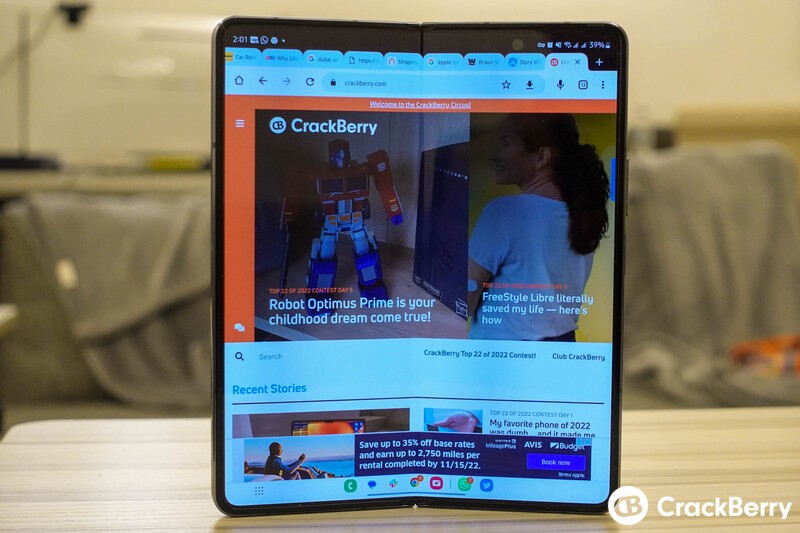 Since Samsung relaunched the original Galaxy Fold, I've loved their foldables range. The first Fold featured a lot of compromises and questionable decisions that could have made the entire industry a non-starter, but every Fold since has massively improved the range.

I've used all four Galaxy Folds, and the Galaxy Z Fold 4 is so polished it can easily be a single daily-use phone for anyone. The Fold 4 is not a giant leap compared to the Galaxy Z Fold 3 – especially when the latter was a major upgrade over the Fold 2 – yet Samsung has made the fixes in just the right places. The result is an almost perfect phone that I think everyone could buy and love as much as I do.

I first reviewed the Galaxy Z Fold 4 when it came out in August, and I loved it so much that I bought two. My family members also adopted it; within just my family, we have five. With the right deals – which are still running now – the Fold 4 can be had for less than a non-folding phone, which makes it a compelling holiday gift for the tech lover in your family.

Why I love the Galaxy Z Fold 4

I've written variations of this post at different times this year, and my true appreciation of the device always comes down to productivity. Much like the original Galaxy Note heralded in the era of large-screen devices that we're used to, the Galaxy Fold range finally brings true portability to a tablet-sized screen. Yes, the iPad Mini and other similar tablets are portable, but they're not practical, as in, you can't stick it in your pocket, and away you go. The Galaxy Z Fold 4 gives the best of a small tablet while also fitting in your pocket.

I'm writing this while stuck in traffic in Dubai, and rather than fire up the laptop, I'm just writing it on the big screen of the Galaxy Z Fold 4. (Yeah, I know, but I promise I'm not writing while actually driving ... ) Similarly, you can't use a laptop or other big-screen device on a plane during takeoff or landing, but the Galaxy Z Fold 4 doesn't fall under this. Simply put, the Galaxy Z Fold 4 lets you still use a big screen at times when a traditional laptop isn't feasible.

The Galaxy Z Fold 4 lets you still use a big screen when a laptop isn't feasible.

The Galaxy Z Fold 4 is just as durable as any other phone.

Since its launch, I've frequently been asked whether the Galaxy Fold range was durable enough. At first, many people – justifiably so – had concerns that the phone wasn't strong enough to handle the rigors of daily usage. Four years into using Folds, I can safely say there are no durability concerns. I've dropped all the Folds at different times, and aside from some micro-scratches that impact any phone, there is no real damage. It's just as durable as any other phone.

Samsung is also known for making the best smartphone displays, and the Galaxy Z Fold 4 is a leader in this category. The front display is fantastic, but the phone comes into its own with the large internal display. The Dynamic AMOLED is vibrant, features rich colors, and makes consuming media an absolute joy. The aspect ratio is a little strange which means you'll end up with black borders above and below the video, but it's a worthwhile trade-off for the large display.

Where the Galaxy Z Fold 4 can benefit everyone

There are a few specific nifty tricks on the Galaxy Z Fold 4 that can really help certain types of users. Mainly, I'm referring to the selfie camera mode and the taskbar.

If you're a content creator, you know most front-facing cameras absolutely suck in comparison to the cameras on the rear. I've seen a lot of general TikTok creators – as in, those with just a phone and no fancy gear – position their phone with the rear camera facing them, record the video and then review it, only to retake it several times until it's perfect. Whether it's the framing, the quality, or the lighting, it takes a lot longer to do this when you can't see what you're doing.

The Galaxy Z Fold 4 is great for creators and professionals.

The Galaxy Z Fold 4 selfie mode fixes this. There's a new Selfie mode in the camera that allows you to use the front screen as a viewfinder and the rear camera lenses. This gives you the benefit of a selfie – you can see what you're doing – with the quality of the rear cameras, which are much better than the front-facing camera. Specifically, I've used this on many occasions when trying to take a group selfie, and while the phone can be a little hard to hold in this mode, the photos can be fantastic. It's also great if you want to take those iconic photos with you and a landscape behind you, as the Samsung wide-angle camera is fantastic.

The taskbar is a new addition to the Galaxy Fold range, starting with the Galaxy Z Fold 4. It replicates the taskbar we're all used to on our computers and lets you store up to eight apps in a semi-permanent bar that sits at the bottom of the big screen. It's semi-permanent as it is there if you're using a single screen where you can give up the real estate, but it disappears when you have two apps running side-by-side and you need all the space possible.

This ties into the Galaxy Z Fold 4's premise as being the perfect device for portable productivity, and it's by far my favorite thing about the range. I know a lot of people with the Galaxy Z Fold 4, and I've also spoken to many regular consumers who have big-screen foldables. Everyone ultimately says they bought one for the big-screen and everything it unlocks in day-to-day life.

Where the Galaxy Z Fold 5 needs to improve

No phone is perfect and while the Galaxy Z Fold 4 comes close, there are a few areas where the next generation can improve. The Galaxy Z Fold 4 supports the S-Pen but you have to carry it separately and it's only supported on the main display; I'd love to eventually see Samsung support this on both screens and find a way to dock this within the phone itself, although this is less likely as the Fold-specific S-Pen is considerably larger than the regular S-Pen found in the Galaxy S22 Ultra and Galaxy Note range.

My gripes with the Galaxy Z Fold 4 are few and far between.

The battery life also needs improvement. There's a large number of features being added to each version of the Fold range, but we're not seeing huge improvements in the battery size or life. The original Galaxy Fold had simply incredible battery life and could easily last two to four days but the Galaxy Z Fold 4 is, at best, 1.5 to two days at a push. With heavy usage, it's a single day only and Samsung definitely needs to find a way to improve this.

I'd also like Samsung to continue its current trend of slightly refining the design of each generation of Galaxy Fold. The current one is the best balance between width, height, and ergonomics we've had yet, and is lighter and thinner than ever before. Yet, there's always room for improvement and we've seen other foldables go even thinner so here's hoping Samsung gets there as well. This is a very minute gripe though, but still worth mentioning.