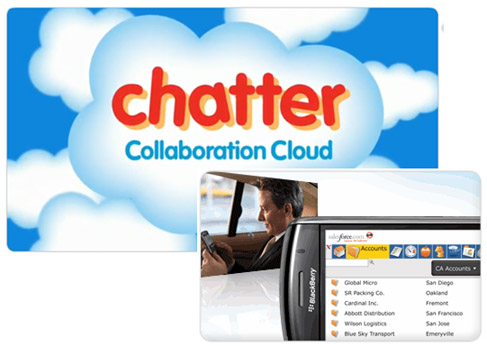 Salesforce.com is a leading provider of sales and field service automation software and has an amazing track record with these CRM (customer Relationship Management) tools, as well as Cloud computing. Over the past few months, they have adopted a new means of communication and collaboration that behaves very similar to Facebook. Salesforce.com calls it Chatter. This tool makes use of status updates, profiles, groups, feeds, document sharing and so on. This gives employees real time communication, which may be necessary in time critical situations.

During Cloudforce 2010 in London, speaker Kraig Swensrud talked about their Sales Cloud 2 product (with Chatter) and introduced the Chatter mobile application. Chatter mobile is available for the iPhone, iPad and, of course, BlackBerry (they showed it working on the BlackBerry Torch). Android support is coming soon. During the announcement, they focused mostly on the iPhone application so I'm hoping that the experience on a BlackBerry is quite similar. Users can check out feeds, chatter, groups, profiles, capture/share images all in real-time. Push alerts can also be set up as well. During the announcement, Salesforce.com stated that nearly 25% of their current customer base has adopted Chatter within the past few months; so they should see most of those integrate Chatter Mobile into their teams as well. Both Chatter and Chatter mobile are free of charge to customers that subscribe to the services provided by SalesForce.com