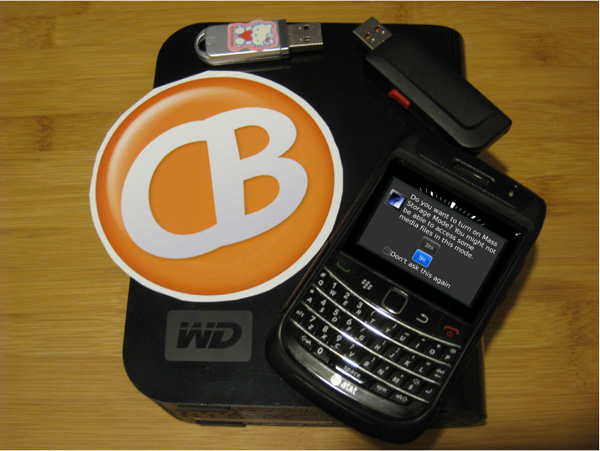 There's a lot of memory installed in my BlackBerry. The Torch 9800 comes with 4 gigabytes of internal memory, and I have a removable 16 GB microSD card installed as well. Until recently, those cards were rather full. My BlackBerry goes where I go, so I usually have it filled with movies, music, ringtones, and anything else that strikes my fancy. My smartphone has so much memory available, I've stopped carrying USB thumb drives. Why would I when my BlackBerry can hold so much?

The Mass Storage mode on the BlackBerry is an extremely useful tool. Using a standard micro USB cable, I can attach the device to any computer and use the smartphone as an external drive. Since the BlackBerry uses standard USB drivers to connect, modern computers have no trouble connecting to and using the memory card(s) on the smartphone. Your BlackBerry will appear as one or more removable drives; you're able to transfer data to and from the device just like you would with a USB flash drive.

When my BlackBerry is attached to the computer as a drive, I'm a fanatic when it comes to that whole Safely Remove Device thing on Windows PC's; I'm sure there's a similar function on Mac's. I always worry about delayed writes or something else causing problems with my memory card if I unplug it too early. It's happened to me before, so I try to be careful.  Before detaching my BlackBerry from the computer, I always make sure to check that it's safe to do so.

So what happens when you want to remove or replace the microSD card from within your BlackBerry? Though some may argue this a useless step, I find it's a good idea to turn off my removable memory card first. That way, I can be certain that no data will be read or written as I remove the card. The process is slightly different depending on your OS.

Keep your memory cards safe and happy; let them know when you're going to disconnect them. Whether it be from a computer or from inside your BlackBerry, microSD cards - and memory cards in general - work best when you give them a bit of warning. Suddenly removing an attached drive can have some negative consequences, so play it safe when it comes to your removable storage.