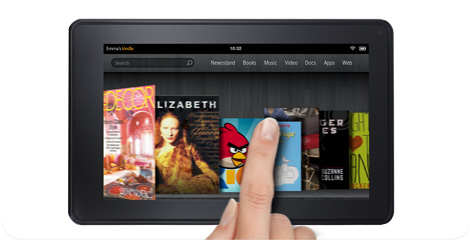 With yesterday's anniversary of the BlackBerry PlayBook getting unveiled to the world and Amazon's announcement today of the new Amazon Kindle Fire, which looks a LOT like a BlackBerry PlayBook, I couldn't help but chuckle at the promise that Amazon has so far yet to fulfill. Back on September 27th, 2010, they fired off this press release to the world:

“When you buy a Kindle book, you can already read it on iPhone, iPad, Android, PC, Mac, BlackBerry, and of course on your Kindle, Kindle 3G, and Kindle DX," said Dorothy Nicholls, Director, Amazon Kindle. "We're very excited to add the new BlackBerry PlayBook to that list. As with our other Kindle apps, the BlackBerry PlayBook app will be free and will incorporate our WhisperSync technology so you can seamlessly switch between devices. Our vision is 'Buy Once, Read Everywhere.'"

I guess the Kindle App for the PlayBook fell pretty low on Amazon's priority list once they decided a KindlePlayFireBook of their own was the way to go. Sucks for us BlackBerry PlayBook owners, and it makes me wonder if we'll ever see a Kindle App for the PlayBook. With this new Developer Relations team ramping up at RIM, I'd sure love to see them secure an early win by surprising us at DevCon next month with an Amazon Kindle app for the updated Playbook Tablet OS 2.0 software. And if not for the PlayBook, I at least hope a Kindle app is there for the launch of QNX SuperPhones.

So PlayBook owners.... when you read the press release above from Amazon on a day like today, does it make you want to laugh, cry, or punch something?