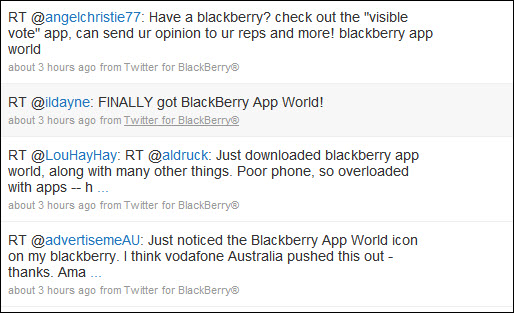 We have been hearing for the longest time now that Research In Motion was/is working on native BlackBerry client (so called 'project banshee') for the hugely popular service that is Twitter. We even posted a poll a while back to see if it was something people wanted, to which the majority of respondents who use twitter said they would like to see. Today, we happened to come across what could quite possibly be the first recognized tweets from the new RIM-built twitter client itself. We're pretty sure there have been others before it, but those would have all been listed under something generic such as "API" so as not to set off any alarms, a practice that is common when wanting to hide the name of an application while getting real world testing on Twitter.

Clicking on the application name in these tweets directs you to blackberry.com/twitter, which understandably serves up a 404 error page at this time. But with this information, one has to wonder how close Research In Motion is to launch. We haven't seen any leaked pictures of the UI in action, and no leaked "beta" versions have surfaced yet. We are sure that a client is coming, but am guessing it's still a little ways away and this broadcasting of the BlackBerry twitter client was unintentional (product team was probably sipping some spiked eggnog Friday afternoon which resulted in this little oversight in their latest beta version).

Either way, it's all good. Whether it takes RIM a month or two or six to get this out, there are already a lot of great third party twitter clients available to BlackBerry users. That said, we sure are anxious to see what RIM has in store for us!