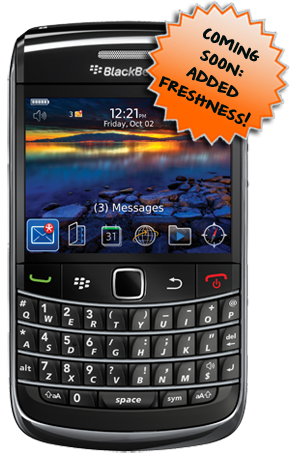 There have been plenty of news floating around over the past two days regarding the BlackBerry Onyx II (delta). Some of hits on points relating it to the BlackBerry 9700a we saw the UAProf doc on previously, though that document showed the resolution as 360x480 (not 480x360) which previously linked the 9700a to the slider before it took the more official bump to 9800. But we're not exactly positive of the relation there so we won't speak about it but, rather stick to what we do know.

Judging by the rumors that are going around and things that we've been hearing as well, what we should be expecting Onyx II to be essentially a BlackBerry Bold 9700 with 512mb of RAM, a 5MP camera and of course the ability to run the fancy new BlackBerry 6 with Webkit baked in. The bigger addition to the rumors that we've been hearing on our end is that the device will also run a new updated processor and that can run OpenGL. If that is indeed the case and turns out to be true, it could be the first GSM device with OpenGL support (we're still not sure where the 9800 slider weighs in on the Open GL side of things... we're hoping it will get it first/too). If you tuned in to The Cell Phone Junkie Podcast last week where Kevin was a guest, he actually referenced the Onyx II and Onyx III (Onyx II has no touchscreen, Onyx III -- likely coming next year -- would add it). Lots of rumors floating around in BlackBerry land, that's for sure.

After hearing this news I began to really think about it and where exactly the Bold 9700 is going to fit in here. If it really is just a refresh of the BlackBerry Bold 9700 what does that mean for the current 9700 and its ability to run BlackBerry 6? Seems kind of strange to have a refresh of a fairly new device already in the works and it may not please a few people to know their device just got outdated so quickly, if all turns out to be more then a rumor.