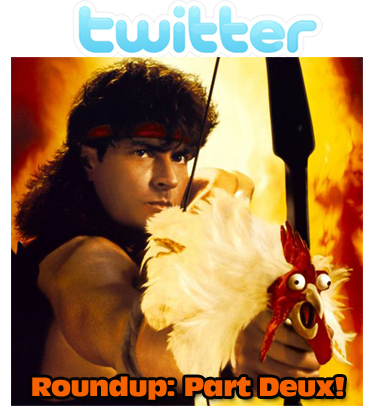 * Update: More clients have been busting onto the BlackBerry scene as of late including RIMs official Twitter for BlackBerry, so for more Twitter goodness, check out our updated Ultimate Twitter Client Roundup.

A few months back we brought you the BlackBerry Twitter Client Roundup and looked at the pros and cons of big gunners Twitterberry and Socialscope, as well as the lesser-known Twibble, BlackBird and BBTweet.  There have been some awesome additions to the Twitter mashup, so it's about time we take a look at ÜberTwitter, TweetGenius and YATCA as well as the Twitter features of the Viigo Alpha and new additions to Socialscope.

ÜberTwitter has raged onto the scene and has built a huge fan base in a short time.  The client boasts numerous options such as their own image servers (instead of using TwitPic), ability to update Google Talk status and location updates (from tower triangulation).  It seems to be a welcome addition to all the users who were bored with Twitterberry or Socialscope.  Currently available as "ÜberTwitter Beta 2", it is free to download and updates seem to be rolling out at a good rate based on user feeback.  Visit http://www.ÜberTwitter.com from your device to download.

At the moment YATCA seems to be a big of a dark horse.  I haven't come across many people that use it, but the ones I have found swear by it (like our good friend @simonsage).  YATCA isn't the standard client as it integrates with your message inbox and gives you a different type of functionality.  I can see how this would be handy for some, but for others it might just get in the way.  You can set the options for what you see in the message list - replies, public timeline, updates etc.  There is still some needed functionality like better ability to check friends timelines.  YATCA has many of the standard features of the other clients so its still close in the race. It is currently available as YATCA 1.6.1 (we checked out the last update at YATCA v. 1.3.6). You can get YATCA OTA here.

The coup de gras of the Twitter Client game, TweetGenius has broken the mold.  Becoming the first premium Twitter Client, it has stepped up the expecations for those that follow.  It is available at an introductory price of $4.99 (regularly $9.99) and is well worth it.  From start to finish it is a polished application, and updates seem to float out every few days.  It's simple three icon interface is easy to use, and it has all the options needed to tweak to your liking.  You can set the update interval, alerts, etc. and the customer support and feedback is second to none.  Currently only available for Bold and Curve 8900, if you are a "Twitter power user" you may want to check this one out at http://thetweetgenius.com/.

Socialscope has been a long running favorite of those who were able to get in on the private beta.  I was lucky enough to take a look at the new features, and I'm amazed at how often the application is updated.  It has had a near top to bottom overhaul since our last look, and seems better than ever.  Still the only application that integrates with Facebook updates, Socialscope seems to be the choice for most users.  It allows you multiple Twitter accounts, Twitpic support, profile notifications and more. Sign up for an invitation at http://www.socialscope.net.

We had mentioned Twitter support in Viigo a bit in the past , but until now it wasn't really available to all users.  With the current release of Viigo Alpha however, everyone can get in on the action.  A a Twitter client, Viigo isn't nearly as powerful as the stand-alone clients, but for a casual Twitter user, it may have just the right amount of juice.  The features are unfortunately fairly bared-boned, but some users may welcome the addition of Twitter into an application they already use.  Check out Viigo Alpha at http://www.getviigo.com/alpha.

Just a reminder, you can follow the CrackBerry Blogs through Twitter, as well as Adam, Kevin, Bla1ze, Kasperapd and Click.  We hope to make the CrackBerry Twitter experience even more interactive and we'll be checking the @replies on the CrackBerry feed, so if you have any questions or replies send them on over!