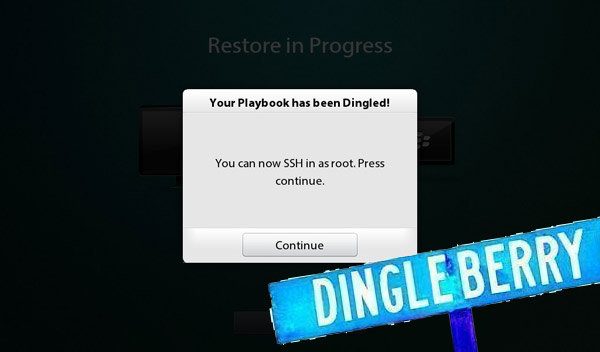 If you've ever wondered if it was worth your time and effort to root/jailbreak your BlackBerry PlayBook, wonder no longer. The latest DingleBerry rooting tool, DingleBerry 3.x, makes rooting your PlayBook a simple matter of activating Developer Mode on your PlayBook and following the instructions in the DingleBerry program.

With the release of DingleBerry 3.x, Mac and Linux machines get some love too. It should be noted that these Linux and Mac users will need to have certain libraries already installed on their computers first. Since I'm a PC, you find a helpful tutorial and links to the necessary libraries at the DingleBerry.it website.

We've written about rooting your PlayBook using DingleBerry before. That process involved pushing some files to your PlayBook, backing up data from and then restoring data to your PlayBook, and finally you might have to pray to the gods of Technology that you unplugged your USB cable fast enough to complete the root.

DingleBerry 3.x is light-years ahead of that process. Downgrading, rooting, and confirming whether or not the root was successful are all accomplished within the rooting tool itself; BlackBerry Desktop Software is not required. The process is straightforward and easy to do; still, there are a couple of things that can ruin your day. Keep reading past the break to find our helpful guide on using this amazing tool to gain root access to your BlackBerry PlayBook.

What we're going to do

We're going to root your PlayBook, giving you the ability to watch Hulu videos from the device as well as add the Android Market to your BlackBerry tablet. To do this, we'll download the 3.x DingleBerry rooting tool from their website, and unzip that program to your computer. We'll enable Developer Mode on the PlayBook so that the tool has the access it needs to complete the process.

Turn on Development Mode for your PlayBook

Touch the gear icon in the upper right of your PlayBook's screen to open its options. Scroll through the list on the left until you find Security. From the list that appears on the right, tap Development Mode. Set the slider tab sitting next to User Development Mode to On. If you have not yet set a password for your PlayBook, you will be prompted to do so now. Make it something that's easy to remember; you'll be entering this password a great deal during this process. This will also become the password for your PlayBook tablet; DO NOT FORGET IT. If you have already set a password for your tablet, you'll be required to enter it before the PlayBook will enter development mode.

Take a look at that development address; you'll need it later. It is usually best to leave it set at the default setting of 169.254.0.1.

If you downloaded DingleBerry 3.x from the DingleBerry.it website, you'll receive a .zip file containing all of the files for the rooting tool. Unzip the files to a place where you can easily find them; I recommended the unzipping the entire archive to a folder on the desktop. Make sure Development Mode is active on your PlayBook and attach the tablet to your computer with a micro USB cable. When first connected to the computer, you should be asked for your PlayBook password. This is the password you used or set when turning on Development Mode.

Since I was running 2.0.0.6149, DingleBerry made it incredibly easy to downgrade my PlayBook by downloading and installing 2.0.0.4869 with very little help from me. I strongly suspect that users running 1.0.8.6067 will find themselves prompted to allow DingleBerry to download and install the .4869 update for them. I imagine the process for upgrading and downgrading to be much the same.

In previous articles, we've talked about downgrading the OS on your BlackBerry PlayBook, but the process was not a simple one. With nearly split-second timing, you would have needed to copy files into a certain folder on your computer. Copy them too late, and it won't do any good. Copy them too early, and you could find yourself with corrupted files.

DingleBerry 3.x brings an end to those days. After starting the DingleBerry application, you'll see a friendly button at the top that says Downgrade OS. If you're running the latest consumer build (1.0.8.6067), clicking the Downgrade OS will actually upgrade your version number.  Still, the process is the same.

Clicking the Downgrade OS button, you'll be presented with a window that will allow you to upgrade/downgrade your OS. You'll need to download the 2.0.0.4869 version of the PlayBook's OS, but that's all handled from within the app. Click inside the box that says "Click here to Download" and DingleBerry will find and download the files you need.

There's no need to start BlackBerry Desktop Software to install the OS to your PlayBook. Clicking the Downgrade button at the bottom of the window will send the software to the tablet and start the install procedure. Your PlayBook will let you know the OS is being updated. Once your BlackBerry tablet is running 2.0.0.4869, you'll be able to use DingleBerry to root the device.

Now that your PlayBook is running the latest rootable verson of the OS - 2.0.0.4869, you'll be able to jailbreak that device with just a few clicks of the mouse. After downgrading or upgrading, click the Continue button found at the bottom of the window to begin the process.

For folks - like me - who've spent a bit of time with the DingleBerry interface, the next screen with the big blue box will look familiar. Where we once spent time using DingleBerry and BlackBerry Desktop software to root the PlayBook, all of the rooting tasks are now handled here.

Enter your PlayBook's password at the top, and then click continue. DingleBerry 3.x takes care of deploying some data to your device, creating a backup, and restoring the backup. The end result is that your PlayBook is rooted. The tablet even gives you a nice message stating that the root has been successful.

Does your web browser work?

If you're like me, you used DingleBerry 3.x to downgrade your PlayBook from .6149 to .4869. This tends to cause some problems with the web browser and the Android system. Both apps seem to hang or freeze once they've been started.

An interesting side effect of downgrading is that these two files don't seem to be affected when the downgrade happens. Thus, you have the .4869 OS trying to use .bar files created for the 2.0.0.6149 version. The two don't really get along. The easiest fix is to simply replace the sys.android.bar and sys.browser.bar files with their .4869 equivalent. It's easy; we'll use DDBP Installer to do all the hard work. First, download and unzip the two .bar files found in the download link below.

Now install and start that application. On the left side, enter your PlayBook's IP address and your PlayBook's password. You should already be in Development Mode (if not, be sure to turn it on). If you left the address set to its default value when you enabled Development Mode, you'll enter 169.254.0.1 as your PlayBook's address. Click the button marked "Connect" and the information below will populate. You'll need to be connected to the PlayBook before you can sideload apps.

At the top of DDPB screen, you'll see a button marked Add. Click it and then find the two .bar files that you just downloaded in the step before this one. Click on sys.Android.bar and then choose Ok or Open. Repeat this process for sys.browser.bar. Now, click the box next to sys.Android.bar and sys.browser.bar so that a check mark appears beside them. Finally, click the Install button found at the bottom of the DDPB screen.

Wait. It does seem to take a good while - maybe 5-10 minutes - to get these .bar files loaded and installed on your PlayBook. The application will tell you when it's finished. Once done, you'll find that the browser works just fine now.

Rooting or jailbreaking (however you want to call it) was once a difficult and laborious process that seemed - to some - to fail more often than it worked. With the release of DingleBerry 3.x, the process is dead simple. Plus, since I don't have to sign up for the 2.0 beta, my PlayBook doesn't end up in limbo for 24 hours if I want to perform a factory reset.

Now that your PlayBook is rooted, will you install the Android Market? Indeed, there are a lot of steps to follow to get the Market running, but you've already completed the most difficult one: the root itself. All of the tools and downloads you'll need are linked in the article, and we've provided tons of pictures and detailed instructions. So, how about it? You gonna run the Android Market on your BlackBerry PlayBook?