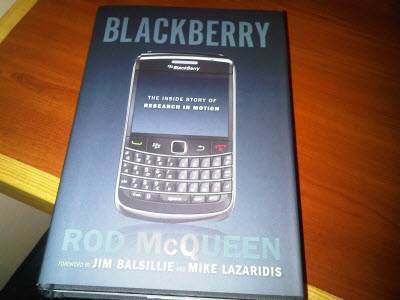 [ This is a user contributed article that comes to us from Michelle Chau. Michelle was in attendence recently at the Rotman School Of Management where Rod McQueen, writer of Research In Motion: The Inside Story spoke. This is her take away write up from that event ]

Hey Crackberry fans! On Monday March 22, I had the opportunity to hear renowned journalist Rod McQueen speak about his new book Blackberry: The Inside Story of Research In Motion, at the Rotman School of Management in Downtown Toronto. Thankfully I work pretty close to the campus at the Reference Library a few blocks away and was able to get away early enough to make the event start time at 5 p.m. The atrium where Mr. McQueen would be speaking was already full of people. The enthusiastic crowd consisted of mostly older crowd , with more men than women. I only saw a handful of 20-somethings like me. It seemed to be a good mix of Rotman MBA students, business people, Blackberry fans (like me!) and tech entrepreneurs who are interested in hearing RIM’s story and seeing how they can apply it to their own burgeoning companies.

I have to say it was very fun for me to check out everyone’s devices as everyone was furiously typing away and playing with them before the event started. I did manage to talk to a few people I just happened to be sitting with so that was fun. Most of the crowd had Bold 9000s but I also saw a lot of 8830s and of course the well loved Curve 8300 series. The introductory speaker who was introducing Mr. McQueen made a joke about how it would seem inappropriate for him to tell us to turn off our smartphones, so he just told us to silence/turn off any other mobile devices besides our Blackberry phones!

Rod was a very fun and engaging speaker and he gave us some insights into the beginnings of RIM (his book, of course, goes into much more detail). I thought I’d go into some of the more memorable points. In true Crackberry fashion, I typed up my notes on my Blackberry Bold 9700 throughout the presentation with the Evernote application and took some quick photos with the 9700’s camera!

Mr. McQueen talked about how his new book (Currently #5 on the Globe and Mail’s Best Seller list!) took 4 long years of intensive research and labour to finish, partly because it was so difficult to get a hold of Jim Balsillie and Mike Lazaridis. It took a long time for him to get a hold of them and have them agree to a long series of interviews.  He eventually did 6 interviews, each about 2-3 hours long to write the contents of his book.

He talked about how he can not think of any other company that has co-CEOs and how rare it is that Balsillie and Lazaridis have made their partnership work so well, for so long. He mentioned that how they make it work is that they really do play on each others strengths and split their responsibilities right down the middle. Mr. McQueen talked about how Jim was such a great salesman and that was his forte at the beginning.

He touched on the early days of RIM and how Mike always had email on his mind, even from the early days and how their entry to the consumer market with the Pearl in 2006 was 3 years in the making. Development on that phone began as early as 2003.

Once upon a time, RIM even had their own sales people which they would call “email evangelists”. It took them a long time before they decided to make the switch and sell through carriers.

Now Blackberry smartphones are on over 500 carriers in over 170 countries worldwide.

He talked briefly about his tour of the Blackberry manufacturing plant and how Mike was like a kid in a candy store again when he was giving him his personalized tour. We saw some quick slides and Mr. McQueen mentioned that all the Blackberry’s are put together by hand in it’s final stages.

Another interesting tidbit that was brought up was how RIM has one of the biggest R&D departments in Canada. He touched on how RIM spends so much time and money on research on physics of wireless. This is why carriers love them so much because they know how to conserve data so well and know more about this topic than anyone else on the market today.

Mr. McQueen also talked about how he found it very interesting that few people ever leave RIM to start their own companies, but he believes we will be seeing more of that now. He told a story about how Mike wanted his one RIM company sign at the time to be placed in the back of his office so that the students from the University of Waterloo could see it from their campus. Mr. McQueen quoted Mike as saying that he “built the refinery next to the goldmine!”.

And of course, to close off - Mr. McQueen talked about the future of RIM. Does he think they can keep going and build upon their previous successes? Absolutely. He threw some numbers at us - In North America, Blackberry has 43 percent market share compared to the iPhone’s measly 22 percent. He continues to believe in RIM’s bright future as more and more people adopt smartphones.

During the question and answer period, someone from the audience asked him what he thought made RIM such a successful company. Mr. McQueen replied that the major drivers were:

Another audience member then asked about what lessons they can take from RIM being a small business owner. Mr. McQueen’s advice was to make sure to keep an eye on costs.

At the end of his presentation, I was able to get my copy of his book signed! I can’t wait to dive more into it in the next few weeks. Be sure to check it out if you want to know more about the history of RIM. The book includes tidbits like how Blackberry got its name.  Can you believe Strawberry was once on the table?

Thanks for taking the time to read this! If want to find out more, here’s Rod McQueen’s website: http://www.rodmcqueen.com/. A link to buy the book: http://www.amazon.ca/Blackberry-Inside-Story-Research-Motion/dp/1552639401 And a link to my Twitter page if you have any interest in following a PR gal/Librarian by day, and Crackberry addict by night: www.twitter.com/mishiechau.