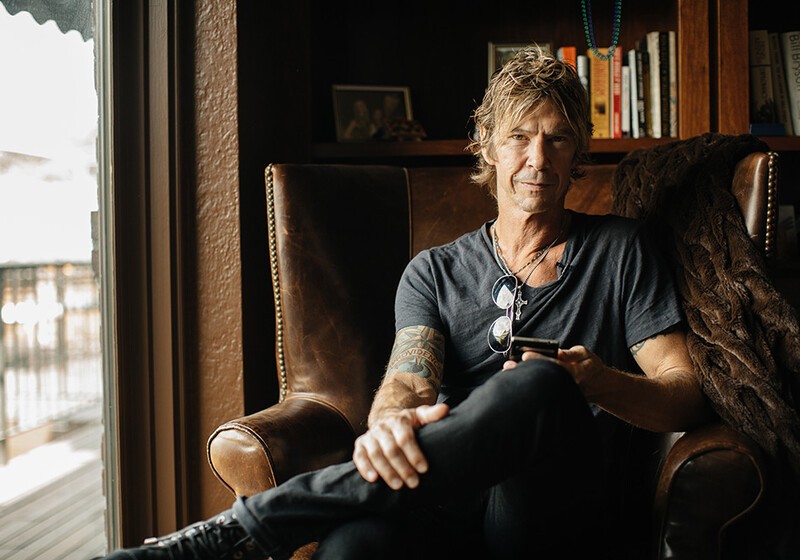 Normally, I'm not really a fan of celebrities speaking on which smartphones they use simply because there's always that lingering thought of whether or not they really use the device or if are they just doing it for the money. Plus, these days it instantly becomes a witch hunt to see if they're using the device. Folks lurk around, waiting for a Tweet or some other scenario where they catch the celeb using something else but a new post over at the Inside BlackBerry blog featuring veteran Guns N' Roses and Velvet Revolver bassist and downright rock legend, Duff McKagan, has to be highlighted.

As the article notes, McKagan is a very busy individual. Aside from being an author of magazine columns and New York Times best-selling books, he's also founder of a wealth management firm, member of several popular bands that continue to sell out arenas worldwide and a husband and father. To help keep it all under control, he relies on a BlackBerry. More specifically, a Porsche Design P'9983. In his latest book, How to Be a Man (and other illusions), McKagan has a whole chapter on why it lines up perfectly with his work style.

"A BlackBerry is for business. For my business, it's a place to check and respond to e-mails, post my gig dates through Twitter, and write my columns," McKagan said. "I'm a grown man now, father of two teenaged girls, a working musician, published author, who lives a clean, healthy lifestyle. People ask me how I manage all of this. I tell them there are no secrets. You wake up every morning and you have a certain amount of hours to fill with whatever you want. Use those hours, be passionate about creating things, and working with people, and creating community and you'll be amazed at what you can accomplish."

"I always loved writing, but I feel like I really started writing when I got my BlackBerry," said McKagan. "It was the first time I could take these crazy thoughts in my head and actually get them out. This little device became my journal on the road. Backstage and in hotel rooms all over the world, I typed and typed and typed."

"my Blackberry is the hub of my productivity. I have written probably 250,000 words on the BlackBerry. It's wild to think I've literally written two books with it, authored a ton of columns, and recorded vocal and guitar riffs that end up being huge parts of songs that we lay down at the studio. It keeps me organized and energized and secure that all of my information is genuinely safe and private."

McKagan also touches on security and privacy of his BlackBerry as his wealth management firm is aimed at musicians, and he often has to deal with other people's financial information. Productivity is key as well for McKagan, noting his BlackBerry is a tuned instrument for what he needs to do.

"People in my family have an iPhone. For me, it's just impossible to type on it and be fluid," said McKagan. "It's kind of like trying to play this cheap guitar and not being able the finger the thing. That's what an iPhone is to me. My BlackBerry, meanwhile, is an instrument tuned for what I need to do."

Perhaps the most interesting highlight here, and the one I relate to most and why this is an awesome article for me, comes by way of McKagan's comments on loyalty from his book.

"I stand up for my gadget and am constantly amazed by iPhone snobbery. But, really, this speaks to how we deal with loyalty. I'm a loyal motherf**ker. I know a bunch of us are. Whether it's OG punk rock or rap, Calvin Klein briefs, Pennzoil, or the girl that we love, there are men of this modern age who insist on loyalty… Loyal people grew up with a good dog. Loyal people have a mom they think is a saint. Loyal people get disappointed when others break their trust. Loyal people stay with their BlackBerry…

The BlackBerry is a rare species to spot in the wild these days, but it's out there. We BlackBerry users know who each other are, and I sense a whiff of dignified air when we cross paths. We nod knowingly. BlackBerry owners are the ones taking care of all of the real business that makes our world go around… You all wouldn't know this stuff. You're too busy posting to Instagram, while we're busy getting it done."

Duff is right and I fully suggest you read the full article on the Inside BlackBerry blog, right now if you haven't already and be sure to check out the Work Creative page BlackBerry has also put up featuring Duff.