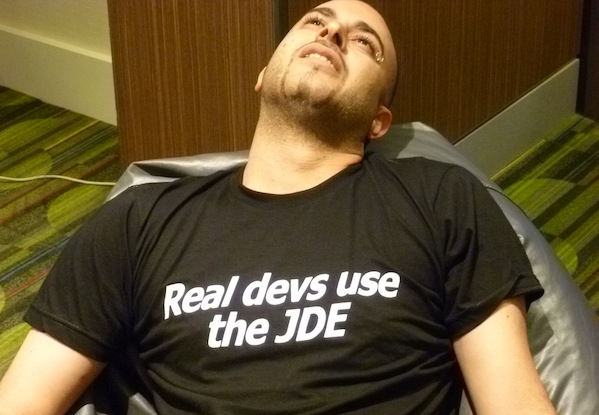 For those that attended, watched the live stream or followed our live blog of today's BlackBerry DevCon keynote event, you may have noticed one thing stuck out, and not because it was a focus of the keynote, but because it was absent. There was no mention of the current Java platform on which the BlackBerry Smartphone OS is based. It started to become clear to that the future of Java development for BlackBerry was about to head into extinction. The BlackBerry App Player, which we had previously had a glance at during BlackBerry World, was no where to be found.

Later in the day during a press session we were able to get a few more answers, but they were not what I was hoping to hear. The BlackBerry App player is no more -- once the transition is made to the BBX superphones, none of the current BlackBerry apps will work on them. In my mind the first thing I thought was that the 20+ BlackBerry apps that I have released have just become obsolete. Now while I do understand that even when the BBX phones hit next year there will still be a demand for a few more years to come, the tough realization that apps that I have spent years of my life developing and improving will all need to be re-written on the new platform. Am I upset? Right now it's some pretty mixed emotions. I do see the vision RIM has moving forward with a new platform and new developer tools, but at the same time I think about the long road ahead of me to make the transition.

RIM showed a lot today to try to recruit new developers to platform with all the great new tools, but there was no mention of what they are doing to make things easier on the current developers that are working on the java platform. The current java tools ...  quite frankly ... are poor at best, so I guess we'll have to put up with them for just a little while longer.

Having said all that, I'm not going anywhere. BlackBerry is still my choice of smartphone and my choice of development platform. How do you feel about the current apps not working when BBX is released? Let us know in the comments.