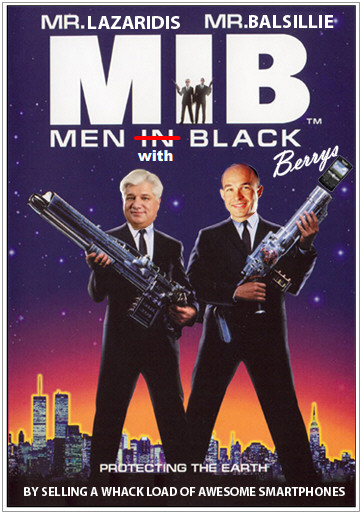 RIM Released their 3rd Quarter Financial Results yesterday, and they are Looking GOOD! Not surprising, especially considering this ABIresearch report that shows RIM will likely end 2007 with 10% share of the total smartphone market worldwide (making them the 2nd largest smartphone vendor, after Nokia). Kudos to RIM and the company's fearless co-CEO's at the helm. It's a bit hard to rewrite this stuff (and it's Friday and I'm getting into Holiday mode), so here are the key details and quotes straight from RIM's release:

Revenue for the third quarter of fiscal 2008 was $1.67 billion, up 22% from $1.37 billion in the previous quarter and up 100% from $835.1 million in the same quarter of last year. The revenue breakdown for the quarter was approximately 80% for devices, 14% for service, 4% for software and 2% for other revenue. Approximately 1.65 million BlackBerry subscriber accounts were added in the quarter and over 3.9 million devices were shipped. The total BlackBerry subscriber account base at the end of the third quarter was approximately 12 million.

"RIM's performance in the third quarter was solid with strong adoption of BlackBerry products and services continuing across multiple market sectors, including enterprise, small and medium business and consumer market segments," said Jim Balsillie, Co-CEO at Research In Motion. "RIM and its partners continue to execute our business plans effectively. We are pleased to see continuing growth amongst business and government users, with the BlackBerry platform being deployed for a widening range of applications, and we are also pleased with the excellent consumer sales results achieved so far in the holiday buying season."

Revenue for the 4th quarter is again expected to grow and is forecast at $1.8 - 1.87 Billion. You can read the full Press Release, and if you want to take in the Conference Call and Webcast, it will be up at RIM's site until midnight on January 10th, 2008.