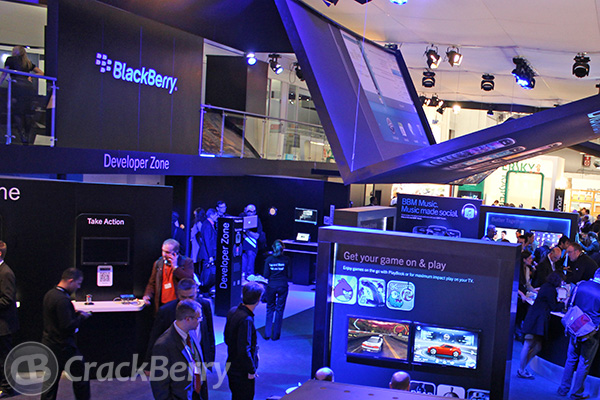 RIM held a cozy little developer panel at Mobile World Congress, where VP of Developer Relations, Alec Saunders, got folks from Zinio, Marmalade and Pacemaker to talk about precisely how awesome it was developing for BlackBerry. While most of the conversation was predictably positive, the Q&A with press was a bit more critical. I made sure to voice a few questions that were raised by you guys and fellow CB staffers.

The biggest issue raised on the developer front, especially since support for Android apps launched in the BlackBerry PlayBook OS 2.0, is how RIM intends to attract, promote and retain quality developers. Supporting Android introduces a few problems; one that was brought up in the Q&A is piracy. There have apparently been many attempts to submit apps that have been blatantly stolen from other developers.  Luckily, RIM is committing to diligence on this front, and has already caught a couple of shady dealers. Alec said "We don't want the 'wild west' of the Android Market in App World"-- which is reassuring.

One of my biggest concerns is that the multi-pronged developer strategy (i.e. supporting a dozen different programming languages) will end up enabling lazy developers rather than being an attractive on-ramp to native applications. Already, we're seeing plenty of apps that devs couldn't be bothered to change mentions of Android in, or web Flash apps that leave behind instructions for keyboard controls. Alec answered that low-quality apps will naturally be voted down, but to me, that just says that BlackBerry App World for the PlayBook and ultimately BB10, may simply be 90% poorly-ported apps from other platforms. There's still plenty of appeal in native applications, even if porting over an existing product to the PlayBook (rather than writing a fresh native one from scratch) is simply low-hanging fruit. As Marmalade CEO Alex Caccia put it, "You can't write Call of Duty with HTML5."

RIM's been aggressively evangelizing to developers, and their presence in the App Planet section of Mobile World Congress was a testament to that strategy. The picture above is from just one of the packed BlackBerry developer sessions at MWC, and according to Alec, European interest is still very high. I saw lots of developers walking away from sessions like this with free PlayBooks, which is a great start, but that's hardly a guarantee of loyalty. Alec said that part of the issue for developers boiled down to timing – specifically, a lot of them were adopting the "wait and see" approach until BB10 hit the streets, while others were planning to launch their first apps concurrently with the new platform.

I suspect that even after the launch of BB10, many devs will want to see RIM's smartphones being far more successful than their tablets before commiting resources to writing a brand spanking new BB10 app.

RIM is also expecting to limit the gross fragmentation of the previous BlackBerry OS by limiting the display aspect ratios of their devices. Rewriting BlackBerry apps for new screen proportions has been a big nuisance for developers in the past. It's good to see RIM is willing to be judicious when picking displays for their next batch of devices. Carriers have been another bottleneck for operating system updates, but Alec assured me that carrier preloads and services would be able to be updated separately from the bulk of the OS, meaning RIM could push out their updates independently, while carriers could still go through lengthy testing without bogging things down.

While OS 2.0 was a big update, there are still a lot of things that need tweaking, and they're on the way. Alec assured me that stuff like portrait orientation in the stand-alone messages app would be fixed shortly. Even once some of the OS 2.0 hiccups are ironed out, there are some features that we're still waiting on, like DLNA, Wi-Fi Direct and some proper "Send To" menu options like we see in BlackBerry smartphones.

All in all, it was clear to me that RIM was trying really hard to engage developers - I would even say harder than any of the other smartphone manufacturers at MWC. Google's crazy Android booth was more of a playground than somewhere developers could get down to brass tacks. Developers still see the market share breakdowns at the end of the day, and I worry that even with all of the engagement in the world, BlackBerry may stay low on the priority list for developers.