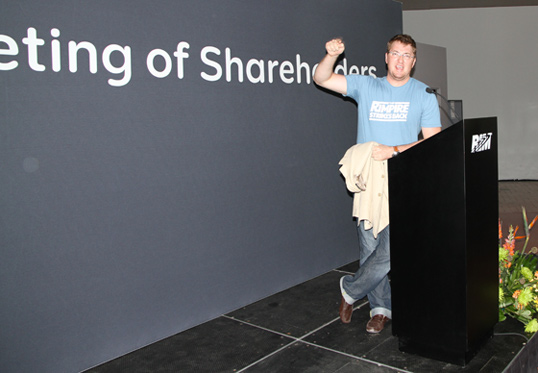 It's been a bit under a year since RIM laid off over 2,000 employees, but already they are looking to rebound and fill nearly 600 open positions. In a job fair held Thursday at the Metro Toronto Covention Centre, hundreds of job seekers turned up eager to see what RIM had to offer. Most positions to be filled are located at RIM's headquarters in Waterloo and range from software development to hardware testing to technical support. Many of the applicants are young and would love to have RIM on their resume, and some are even ex-RIM employees hoping to get another position within the company. Keep reading and see what some of the job fair attendees had to say.

What some job applicants had to say about the BlackBerry Job Fair:

1. Colin Davidson, 56, a software developer with 30 years experience. He was laid off by RIM last June. Why he is back?

"They're a good company. They pay well and treat you well. Their management style is friendly. You get to work on very interesting stuff. They have a good bonus program if they make their numbers," he said, adding he is surprised at all the negative publicity the company gets.

"Their sales have actually gone up. They have a big captive market in business and government that use their BlackBerrys because of their secure encryption and that is not going to go away. But they've got to appeal to the general public if they want to grow more."

He is dubious about RIM's strategy of developing and using their own apps on devices rather than just using Android apps, which have a broader appeal but would be less lucrative for RIM in the long run.

2. Anthony Abhumhen, 39, a hardware engineer with 10 years experience, who is doing contract work and attending college.

"RIM is Canadian and it's in our backyard, so a job with them means being able to contribute to the Canadian economy. That's important to me," he said.

"Apple has peaked. With RIM there's room to grow and I want to be part of that momentum." Though Abhumhen has commuted to a job in the U.S. in the past, he says his wife doesn't want to relocate there.

"It's one of the biggest smartphone companies in the world. To have RIM on your resumé makes you stand out from the competition. Working for them would be a dream job for me," he said.

"Of course they've had their problems but what company doesn't?" His advice? "They need to associate RIM with the BlackBerry brand. Everyone knows Apple makes the iPhone but a lot of people around the world haven't heard of RIM even though they know about BlackBerry."

"First reason I want to work for RIM is I own a BlackBerry and it's absolutely great. I love it," she said. "If you have a BlackBerry in India it's a status symbol." The price for a BlackBerry Curve, for example, in India has come down to $125 from $500 last year, she said. "RIM has come up with innovative ideas in the marketplace."

"I've always wanted to work for RIM because it's a big name in technology," he said. "They have their challenges but they're trying to change things and get back into shape to be No. 1 again. To do that they need to bring in the right people, like me," he chuckles.

As a recent graduate, he says he's happy to have been invited to the job fair. "There's not that much opportunity for freshers. Most places look for experience," he said. As for RIM's recent woes, "Ups and downs happen in every business. It doesn't matter."