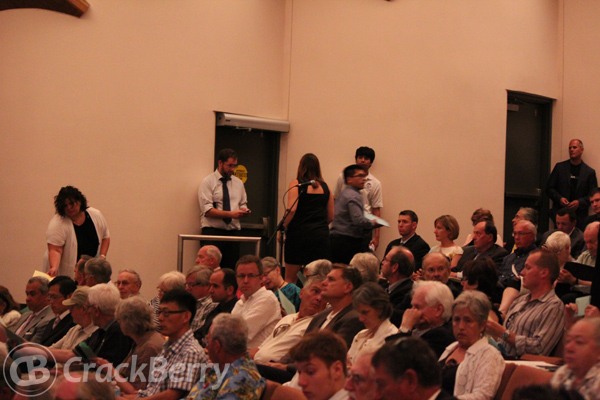 Between heading to Waterloo to attend RIM's Annual General Meeting of Shareholders and visit BlackBerry HQ, it's been a busy week for me. I'm still playing catch up on a lot writing and reading. But last night / this morning in bed I was catching up stories from the week on my PlayBook. Seeing a lot of wrongly-reported stories out there, I felt the need to write this one ASAP to clarify things.

Apparently RIM has received a lot of flak by the media from people saying they cut off the Question & Answer period at the AGM too early. I even saw people saying that when Barbara Stymiest ended the Q&A session there were still 10 people lined up on both sides of the auditorium waiting to ask questions (this was said by a certain individual who left the AGM early to give an interview to BNN who wasn't actually in the room to see it... I know this as the AGM went long and when it finished I had to sprint from the auditorium to where BNN was setup to do my interview and when I got there this guy was finishing up).

Sitting in the audience and looking back, there were maybe *two* people lined up at the microphones on either side. There were a few others standing by the walls, but they were not in line. They were standing there throughout the AGM. AND... the people who were "cut off" at the microphone were people who had ALREADY ASKED QUESTIONS. They went to the back of the line, waited, and came back to ask more questions. ANYBODY who truly wanted to ask a question in that audience absolutely had plenty of opportunity to do so.

RIM ended the Q&A in exactly the same manner last year. Once you get the same people going back in line again and again asking more unrelated, off-topic questions, you kill it. And thank god RIM did.. or I'd still be sitting there listening to some guy go on about China and security.

If you tuned into our live blog from the AGM or listened to the webcast, you'll know that most of the questions being asked during the Q&A we're pretty irrelevant. An AGM isn't the venue to complain about ShopBlackBerry being out of stock of Rapid Chargers. There were maybe a few good questions. One guy did go on a rant (he really didn't ask a question) which got applause from the crowd calling for more change on the board. That message definitely did get across to the board (diversity is good - I'm always in favor of more diversity). I even asked RIM's CEO Thorsten Heins about this the next day during our sitdown, and he acknowledged this and said that Barbara Stymiest "is working on enhancing the capabilities of the board". I think you will see some further change happen there.