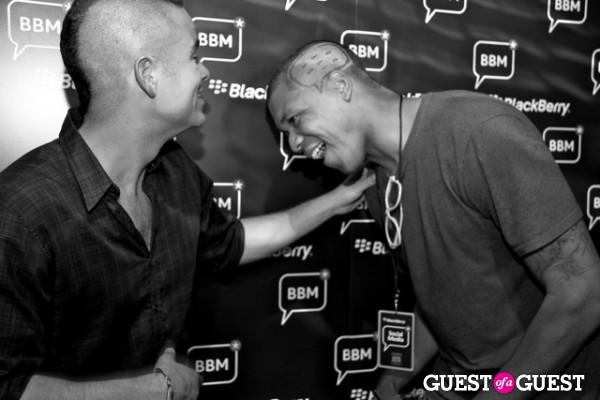 The BBM Lounge was in full swing last week when Xomad hosted Mark Salling's record release party in LA. Mark plays Puck on Glee and I'm pretty jealous I didn't get to attend the BlackBerry sponsored event, as I am a huge Glee fan, and obviously love my BlackBerry. The night was packed with music, food, and fun as Mark Salling performed songs from his debut album Pipe Dreams and guests used their BlackBerry smartphones to order hors d'oeuvres and themed cocktails like the BlackBerry Lemonade. Everyone knows BlackBerry batteries never last as long as you want or need them to, so if you were in attendance and your battery was running low, you could scan a barcode and a BBMe concierge would deliver you a fresh one. I need that in my daily life!

Judging by the pictures, it looks like everyone had a great time at The BBM Lounge 3.0.  And seriously, how cool to attend a party where having your BlackBerry out all night isn't frowned upon, but instead encouraged! BlackBerry Messenger is one of the best features of BlackBerry, in my opinion, and events like this truly showcase how much functionality and potential BBM has.

There were a ton of celebrity attendees as well and you can check out the full list and more pictures after the jump.

Pictures courtesy of Xomad and Guest of a Guest LA.