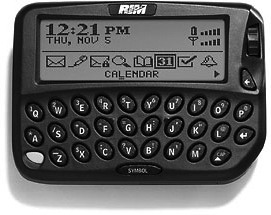 Granted, it's a small part but when speaking of Twitters early days Twitter founder, Jack Dorsey credits the use of his then RIM 850 as a tool that helped spark status updates across the World.

"I had a RIM pager, the 850, the first email device. I programed a system where I could fire off an email from that and set my status from anywhere. And it worked! And I was able to also at a regular interval pull my buddy list and get those updates sent to my email address. It was awesome! But the number of people who had those mobile devices was so minimal that the timing was just not right. This was 2001."

We'd like to pretend we are surprised at this news but really -- we're not. People tend to forget that RIM was one of the first companies to make use of mobile data. The RIM 850 provided e-mail and WAP services, with limited HTML all across what was then basically a 1G network, called Mobitex. The [email protected] pager was in the hands of approximately 400,000 users in 1997 then blew up to 51 million users by 2002.

Source: Gizmodo
They say it's for science