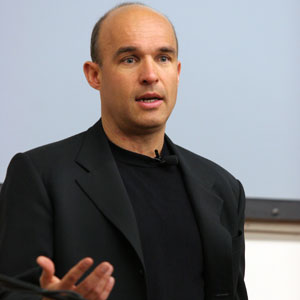 There is a big change coming in the way we listen to music and if RIM CEO Jim Balsillie has anything to do about it BlackBerries will be among the leading providers of mobile music in the near future.

According to a piece in today’s Globe and Mail, Balsillie wants the Blackberry to be leading the revolution in blending professional communications tools with music listening devices. “Apple has done us an enormous favour by saying you should expect music on your cellphone,” he said. “I think it’s 10 if not 100 times harder to do the communications aspect onto an MP3 player than to do the mass media player onto a communications framework. I think we’ll absolutely nail it before some new entrant comes even close. You know, everyone’s brave in the locker room. Let’s get it done.”

Clearly the maker of the CrackBerry is picking up the gauntlet thrown down by Steve Jobs last month when he unveiled the new iPhone with its graphically exciting iPod features.

This is hardly good news for the entertainment industry. That industry's efforts to protect its content online through Digital Rights Management (DRM) software are holding up development of the wireless industry, says Balsillie. He went on the criticize the DRM software that controls how consumers access and use the music tracks they buy online by saying it has become a messy process that essentially charges people twice for the same music if they use incompatible devices and discourages the wider adoption of portable digital music. A recent report on the BBC reported how some people paid two dollars for song download but then found a 20 dollar bill on their cell phone bill in data download and time usage bills “I think [DRM is] just going to break down with the normal proliferation of the Internet,” said Balsillie. “It’s going to be tough. I think content providers are going to have to shift their business models. But they will go down swinging.”

The music industry again seems to have been caught napping by changes in the way the internet and digital communications are evolving. Late onto the downloading bandwagon they are again scrambling to catch up to the proliferation of mobile communication devices.

The indication that RIM is not interested in joining the increasingly complicated milieu of DRM technologies, is bad news for the entertainment business which has thrown its weight behind DRM in an attempt to prevent online digital piracy. RIM who primarily sells wireless technology to businesses and government, has moved into a broader market with its first consumer device, the Pearl. It’s a market that RIM want to expand into and mobile music players and cameras are add-ons that are attractive to the consumer marketplace.

RIM expects to add one million new BlackBerry users this quarter and will likely announce deals to bring music and other content, such as picture messaging, to its new consumer BlackBerries before the end of this year.