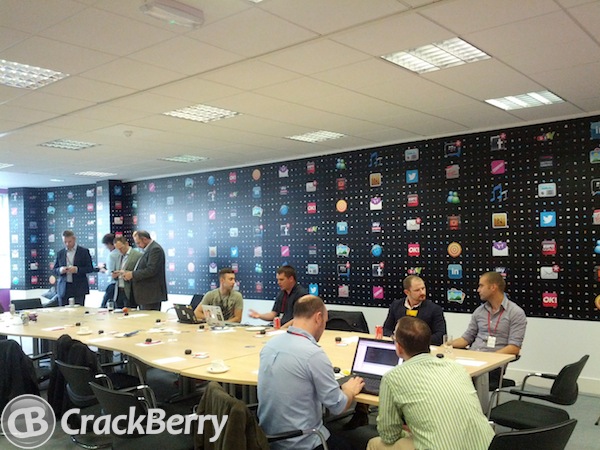 I spent a few hours in the 'Tech Centre' at Research in Motion's UK headquarters today. I'm not very technical but fear not - I didn't need to be. I was there as they were promoting the new 'porting lab' that they now have up and running at the building in Slough. What's a porting lab I hear you ask? RIM has done something pretty special to help developers who need a hand getting their app ported over to BlackBerry 10. If you need some professional help -- free of charge --you can now book an appointment at the Tech Centre where an expert will be there to assist you with getting the application ready for BB10. Pretty cool eh? The lab will be open five days a week and there will be a BlackBerry evangelist on hand to assist with any issues you may have.

They have a couple of rooms available - a large one with work stations (and bean bags if you just fancy chilling out with the other devs and drinking coffee), or a slightly smaller one which can be used for top secret work if you don't want other people to hear what you are discussing. Both have been freshly decorated with fancy BlackBerry icon wallpaper as you can see in the photographs.

And it isn't just the UK where the labs are being set up. They will also be situated in San Francisco, Vancouver, India and Indonesia to start with. I presume if they are a big hit RIM will think about other locations where BlackBerry has a big market presence.

This is just another step forward for RIM in their continuing mission to give developers as much help and incentive as possible. We already know about the $10K developer commitment where RIM guarantee that devs will generate $10k from a BlackBerry 10 app. (If the app sells less than $10k RIM will pay the dev the difference). Combined with the 5000 Dev Alpha units that RIM have given out and the BlackBerry 10 World Jam it appears that the Canadian company are doing everything right.

Speaking of the Dev Alpha devices - I got to chat with Alec Saunders (VP of Developer Relations) at the event for the first time. As well as being an extremely nice gentleman he said that of the 5000 devices already given away to developers, 20% of devs have already submitted apps. That sounds like a pretty decent figure if you ask me considering we are still some months away from the new operating system even going live.

So if you are a developer, or are thinking of maybe getting into it you can rest assured that the support is there. Nothing like peace of mind. Nice work RIM, keep it up.