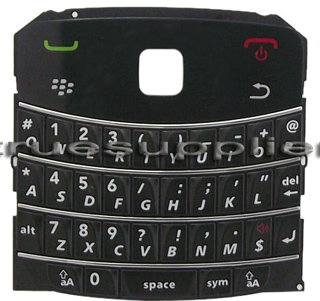 * Update: Lots of confirmation coming in today that the BlackBerry Pearl 9100 will definitely be offered in two versions, both with SureType and with Full Qwerty. Totally awesome!! *

What the heck?! Our pal Al Sacco over at CIO.com just posted an out of left field story found via twitter sourced from a site called TrueSupplier that is offering a FULL QWERTY keyboard replacement part for the not-yet-announced BlackBerry Pearl 9100 Smartphone. The photo and part looks real deal, but this is something I haven't heard about before and seems pretty crazy at first look. The BlackBerry Pearl series has always made use of RIM's SureType predictive text system, which places two letters on one physical button and we previously have seen photos and videos of the 9100 showing off the traditional SureType keyboard.

As crazy as it seems at first glance though and despite the joking title to this post, it could be plausible and might even be OK for "average" hands to type with. It's actually the Palm Pixi that gives me hope... it features a really narrow full physical qwerty keyboard that I have found is very comfortable to use and be accurate on. Plus SureType takes time to learn while a full keyboard is completely intuitive. The benefits could easily outweigh the cons here. Crazy stuff. Vote on the poll and drop in the comments what you think. I'm really curious to see if this pans out and we see this happen or if it's just wishful thinking.