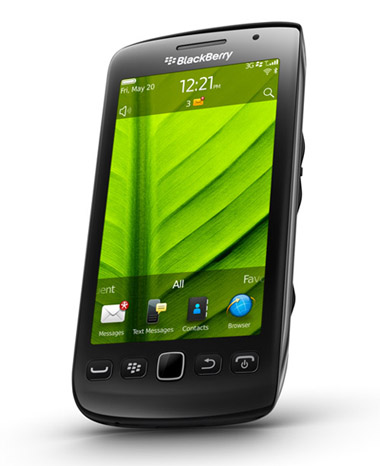 As the rollout of the new BlackBerry 7 devices continues, RIM announced they are launching the Blackberry Torch 9860 in Spain. If you've been waiting to get your hands on this new all-touch device then you can rest assured knowing that you can grab it starting next week in Movistar stores from 79 euros. How many of you have been holding out for this device? Don't forget to head on over to the forums or read our help guides when you pick it up.

Movistar and RIM launch the BlackBerry Torch 9860 Smartphone in Spain

Madrid, ES and Waterloo, ON - Movistar and Research In Motion (NASDAQ: RIMM; TSX: RIM) today launched the new BlackBerry® TorchTM 9860 smartphone, which features the new BlackBerry® 7 operating system in a stylish new all-touch handset design. With a spectacular 3.7" display, the largest ever on a BlackBerry® smartphone, the new all-touch BlackBerry Torch 9860 smartphone is optimized for displaying web pages, photos and videos, as well as delivering powerful gaming experiences. It also delivers the highly refined, real-time communications and collaboration experience loved by millions of BlackBerry smartphone users around the world. The new BlackBerry Torch 9860 will be available in Movistar stores next week from 79 euros.

The new BlackBerry Torch 9860 smartphone runs BlackBerry 7, a new operating system (OS) for BlackBerry smartphones. It provides users with a fast, fluid and intuitive experience with improved browsing, voice-activated searches, the ability to manage personal content separately from corporate content, as well as additional personal and productivity apps out of the box.

The new BlackBerry Browser combines the dramatically improved performance of the advanced WebKit browser engine together with the powerful hardware enhancements found in the new BlackBerry Torch 9860 to deliver browsing results that are up to 40% faster than BlackBerry® 6 based smartphones and up to twice as fast as models running BlackBerry® 5*. Additional enhancements to the browser have also optimized HTML5 performance for incredible gaming and video experiences.

Key features of the new BlackBerry Torch 9860 smartphone include:

Telefónica is one of the largest telecommunications companies in the world in terms of market capitalisation. Its activities are centered mainly on the fixed and mobile telephony businesses with broadband as the key tool for the development of both.

The company has a significant presence in 25 countries and a customer base that amounts to 290.5 million accesses around the world. Telefónica has a strong presence in Spain, Europe and Latin America, where the company focuses an important part of its growth strategy.

Telefónica is a 100% listed company, with more than 1.5 million direct shareholders. Its share capital currently comprises 4.563.996.485 ordinary shares traded on the Spanish Stock Market (Madrid, Barcelona, Bilbao and Valencia) and on those in London, Tokyo, New York, Lima, Buenos Aires and São Paulo.