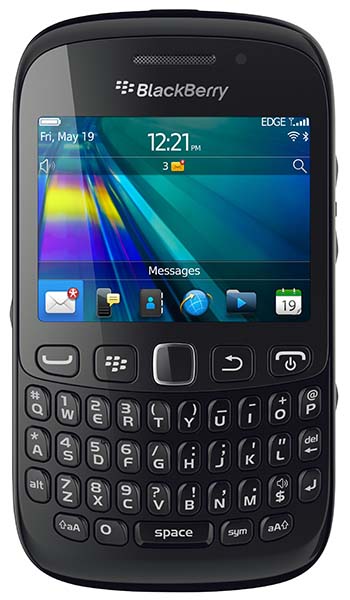 ‘Stop missing out’ with the sleek, stylish, and affordable BlackBerry Curve 9220

Jakarta, Indonesia - Research In Motion (RIM) (NASDAQ: RIMM; TSX: RIM) today announced the launch of its most affordable BlackBerry 7 smartphone for customers in Indonesia – the BlackBerry® Curve™ 9220. Designed to be both easy to use and easy to own, this compact and sleek smartphone provides many features and apps that help users to ‘stop missing out’ and stay connected to the people and information that matter most throughout the day.

The dedicated BBM™ key on the BlackBerry Curve 9220 brings the power of RIM’s popular mobile social network up in an instant. The Facebook® for BlackBerry and Twitter® for BlackBerry apps are included, as well as Social Feeds, which allows users to post updates to multiple social applications simultaneously and capture updates from news sources (RSS), social apps and instant messaging apps all in one consolidated view.

Wtih BlackBerry® 7.1 OS, the BlackBerry Curve 9220 supports the full complement of BlackBerry services, and the smartphone's built-in Wi-Fi® can provide smooth and fast Internet browsing without incurring mobile data usage costs. It also includes a built-in FM radio, allowing users to tune into their favorite local stations, and listening to the FM radio does not require a data plan or use data services.

The user experience with this compact and sleek smartphone is further enhanced with a long lasting battery, giving users up to 7 hours of talk time or up to 28 hours of music playback or FM radio listening on headphones.

Forward-looking statements in this news release are made pursuant to the "safe harbor" provisions of the U.S. Private Securities Litigation Reform Act of 1995 and applicable Canadian securities laws.  When used herein, words such as "expect", "anticipate", "estimate",  "may",  "will", "should", "intend", "believe", and similar expressions, are intended to identify forward-looking statements.  Forward-looking statements are based on estimates and assumptions made by RIM in light of its experience and its perception of historical trends, current conditions and expected future developments, as well as other factors that RIM believes are appropriate in the circumstances.  Many factors could cause RIM's actual results, performance or achievements to differ materially from those expressed or implied by the forward-looking statements, including those described in the "Risk Factors" section of RIM's Annual Information Form, which is included in its Annual Report on Form 40-F (copies of which filings may be obtained at www.sedar.com or www.sec.gov).  These factors should be considered carefully, and readers should not place undue reliance on RIM's forward-looking statements.  RIM has no intention and undertakes no obligation to update or revise any forward-looking statements, whether as a result of new information, future events or otherwise, except as required by law.