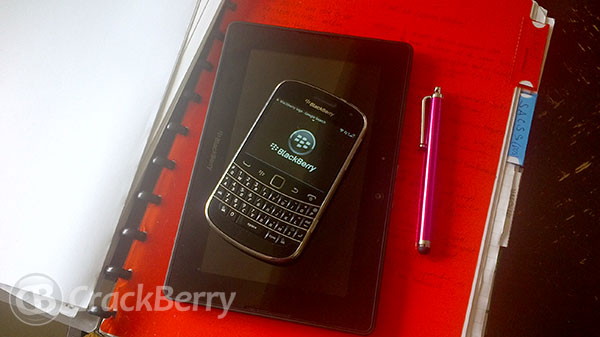 Today, RIM has announced the opening of BlackBerry apps lab at the University of Pretoria, a BlackBerry Academic Centre. RIM already have 39 academic institutions in Africa signed up to the Academic Program and the University of Pretoria is the largest one in South Africa. The aim of the lab is to help accelerate mobile software develoment, as well as creating more opportunities and jobs in the mobile arena. As well as providing the usual development resources and tools, the lab also marketinng, training and sales tools to aid developers increase their business opportunities. RIM also hope to work with developers in the area to develop local and regionally applicaitions for currently BlackBerry devices, BlackBerry PlayBook as well as the upcoming BlackBerry 10 smartphones. Read the full press release below.

RIM opens BlackBerry apps lab at the University of Pretoria

The lab will provide local developers, including University of Pretoria students and faculty, start-ups, entrepreneurs and others, with access to resources in development, marketing, sales and training to help them expand their ideas and business opportunities. RIM will work with developers to create local and regionally relevant applications for BlackBerry smartphones, the BlackBerry PlayBook and devices running on the upcoming BlackBerry® 10 platform.

Prof. Stephanie Burton, Vice Principal, Research and Postgraduate studies at the University of Pretoria said, "We are excited to be partnering with RIM to bring the BlackBerry apps lab to our campus. One of our key objectives at the University of Pretoria is to empower our students to develop industry relevant skills that will accelerate mobile application development in South Africa and help create new economic opportunities and jobs in the mobile space. Our partnership with RIM, and the collaboration with the DOC's e-Skills Institute, will allow us to deliver on this promise."

Rosey Sekese, Director General of the DOC, said, "The e-Skills initiative aims to address the shortage of critical skills in the ICT sector. During this financial year, several initiatives are planned. We are excited at the huge potential that this programme offers us in our quest to close the skills gap in the sector."

The e-Skills Institute (e-SI) is a South African Government initiative that aims to harness the potential of Information and Communication Technology (ICT) across the whole of society in order to help address the major socio-economic challenges that South Africa faces in service delivery, wealth creation and global competitiveness. The institute sees itself as a catalytic collaborator in e-skilling the nation in employment readiness, effective e-governance and service delivery, business development, socio-economic development and research and development. For more information, visit http://www.doc.gov.za.

Bob Bose, Managing Director for Africa at RIM said, "RIM is committed to supporting mobile software development in Africa and future digital entrepreneurs. The growth of smartphones and the appetite for mobile apps presents a huge opportunity for developers, and we're pleased to work with the Department of Communications and the University of Pretoria to share resources and ideas that will help and inspire innovative minds to make the most of that opportunity. South Africa is a key innovation hub and by working together, we aim to build a community that will create locally relevant apps for BlackBerry customers, new skills and job opportunities for graduates and new revenue streams for developers."

The BlackBerry apps lab is part of RIM's extensive developer programme that spans Africa and includes key innovation hubs such as Nigeria, Kenya and Egypt. RIM also partners with groups such as Mobile Mondays and Garage 48 across the continent, hosts BlackBerry Developer Days and the annual BlackBerry Innovation Forum in Johannesburg, where developers are encouraged to share ideas with their peers, and hear from business innovators, technology leaders and BlackBerry customers.

RIM has been working with 39 universities, colleges and schools across Africa through the BlackBerry Academic Program, which provides institutions with materials and content to teach and educate students on mobile application development.

About the University of Pretoria

UP is the leading research university in South Africa and one of the largest in the country.

The University has seven campuses as well as a number of other sites of operation, such as the Pretoria Academic Hospital. Central administration is located at the Hatfield Campus.

The University of Pretoria offers more than 1800 academic programmes in two of the official languages, namely Afrikaans and English. (Some programmes and modules are offered only in English.)

In 1996, the University of Pretoria became the university with the highest research output in South Africa and we have maintained this status.

The University of Pretoria celebrated its Centenary in 2008.

The academic programmes of the University are offered in nine faculties, as well as a business school. The faculties comprise a total of 140 departments and 85 centres, institutes and bureaus. UP is at the forefront of tertiary education in the country and collaborates with world-class partners to ensure continued excellence in learning and teaching.

This news release contains forward-looking statements within the meaning of the U.S. Private Securities Litigation Reform Act of 1995 and Canadian securities laws, including statements regarding: RIM's intention to provide shareholders with updates, when possible, relating to RIM's progress and challenges; RIM's transformation as it moves towards the BlackBerry 10 launch; RIM's expectation that the business will continue to be challenging for the next few quarters; the effects of the intense competition in the wireless communications industry, and RIM's plans and strategies to address competition; RIM's current expectations regarding its financial performance in Q1 of fiscal 2013, and its anticipated cash position at the end of the quarter; RIM's expectations and beliefs relating to the support of its developer partners and the development of its ecosystem in advance of the launch of BlackBerry 10; the anticipated timing of the launch of RIM's BlackBerry 10 platform; the anticipated benefits of recent strategic changes to RIM's senior management team and the hiring of outside advisors; RIM's plans and expectations relating to the CORE program; and RIM's expectation that it will be able to create long-term value for its stakeholders. The terms and phrases "would", "will", "transformation", "move towards", "continue", "ongoing", "expect", "likely", "well underway", "to be ready", "believe", "progress", "still on track", "position RIM for the future", "prepare for the launch", "targeted", "goal", "accelerating", and similar terms and phrases are intended to identify these forward-looking statements. Forward-looking statements are based on estimates and assumptions made by RIM in light of its experience and its perception of historical trends, current conditions and expected future developments, as well as other factors that RIM believes are appropriate in the circumstances, including but not limited to general economic conditions, product pricing levels and competitive intensity, supply constraints, the timing and success of new product introductions, RIM's expectations regarding its business, strategy, opportunities and prospects, and RIM's confidence in the cash flow generation of its business. Many factors could cause RIM's actual results, performance or achievements to differ materially from those expressed or implied by the forward-looking statements, including, without limitation: RIM's ability to enhance current products and develop new products and services in a timely manner or at competitive prices, including risks related to further delays in new product introductions, such as the Company's BlackBerry 10 smartphones; risks related to intense competition, including RIM's ability to compete in the tablet market, strategic alliances or transactions within the wireless communications industry, and risks relating to RIM's ability to maintain or grow its services revenues; RIM's reliance on carrier partners and distributors; risks relating to network disruptions and other business interruptions, including costs, potential liabilities, lost revenue and reputational damage associated with service interruptions; RIM's ability to manage inventory and asset risk; RIM's ability to implement and realize the anticipated benefits of its Cost Optimization Program and CORE program; RIM's ability to maintain or increase its cash balance; security risks and risks related to the collection, storage, transmission, use and disclosure of confidential and personal information; RIM's ability to attract and retain key personnel; RIM's ability to adapt to recent management changes and fill vacant key management positions; RIM's reliance on suppliers of functional components for its products and risks relating to its supply chain; RIM's ability to maintain and enhance the BlackBerry brand; risks related to RIM's international operations; risks related to government regulations, including regulations relating to encryption technology; RIM's reliance on third-party network infrastructure developers, software platform vendors and service platform vendors; RIM's ability to expand and manage its BlackBerry App World applications catalogue; RIM's reliance on third-party manufacturers; potential defects and vulnerabilities in RIM's products; risks relating to litigation, including litigation claims arising from the Company's past practice of providing forward-looking guidance; RIM's ability to manage its past growth and its ongoing development of service and support operations; potential additional charges relating to the impairment of goodwill or other intangible assets recorded on RIM's balance sheet; disruptions to RIM's business as a result of shareholder activism; risks related to intellectual property; and difficulties in forecasting RIM's financial results given the rapid technological changes, evolving industry standards, intense competition and short product life cycles that characterize the wireless communications industry. These risk factors and others relating to RIM are discussed in greater detail in the "Risk Factors" section of RIM's Annual Information Form, which is included in its Annual Report on Form 40-F and the "Cautionary Note Regarding Forward-Looking Statements" section of RIM's MD&A (copies of which filings may be obtained at www.sedar.com or www.sec.gov). These factors should be considered carefully, and readers should not place undue reliance on RIM's forward-looking statements. RIM has no intention and undertakes no obligation to update or revise any forward-looking statements, whether as a result of new information, future events or otherwise, except as required by law.