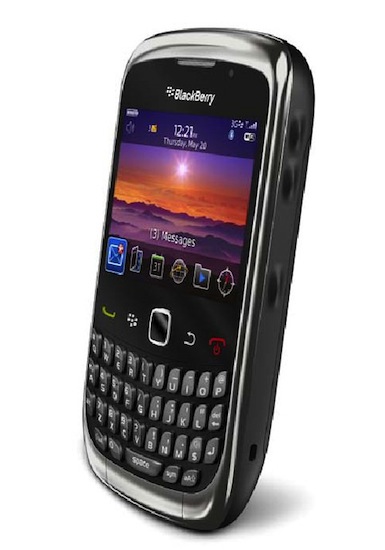 No surprise here considering Rogers in Canada already announced the new BlackBerry Curve last week, but this morning it became official on a Research In Motion level. Like the Pearl 3G, the new BlackBerry Curve will be known as the BlackBerry Curve 3G. It's the next generation of the 8500 series, which basically remains the same entry level device as the 85xxx, but now has 3G. Also, while the device is shipping with BlackBerry OS 5.0 to start, it is labeled at 6 ready. That's a nice suprise that I wasn't totally expecting. So it looks like you'll be able to stick with 5 or upgrade to BlackBerry 6 on the Curve 3G as you see fit. We've seen the Curve 85xx series be extremely successful in the marketplace, and this one looks like a nice little followup that should do big sales for RIM. Stay tuned for more details - we'll have a full BlackBerry Curve 3G review up soon.

Research In Motion (RIM) (NASDAQ:RIMM)(TSX:RIM) today announced the new BlackBerry(R) Curve(TM) 3G, an exciting addition to the globally popular BlackBerry Curve series of smartphones. Designed to provide the growing mass of smartphone purchasers with a distinctly powerful, approachable and affordable choice, the BlackBerry Curve 3G supports high-speed 3G (HSDPA) networks around the world and gives users the exceptional communications features they need to accomplish more than ever, when they're at home, at work and everywhere in-between.

"The majority of people in the worldwide mobile phone market have yet to buy their first smartphone and the BlackBerry Curve 3G is designed to provide an extremely attractive and accessible choice that will help convince many of them to make the leap," said Mike Lazaridis, President and Co-CEO at Research In Motion. "The new BlackBerry Curve 3G is a perfect choice for happily busy people who are looking for a user-friendly 3G smartphone to help them make the most of their day and to stay connected with their friends, family and co-workers."

The BlackBerry Curve 3G smartphone features a comfortable full-QWERTY keyboard for fast, accurate typing, optical trackpad for fluid navigation, built-in GPS and Wi-Fi(R), as well as dedicated media keys, so music lovers can easily access their tunes while on the go. The new smartphone also features a camera that can record video and a microSD/SDHC slot that supports up to 32 GB memory cards for media storage. Support for 3G networks makes browsing faster, streaming music smoother, and gives users the ability to talk on the phone while they browse the web, instant message with BlackBerry(R) Messenger (BBM(TM)) or share their location with friends on popular social networking sites.

The new BlackBerry Curve 3G smartphone (model 9300) will be available from various carriers and distribution partners around the world beginning in August. Check with local carriers for details about availability and pricing.