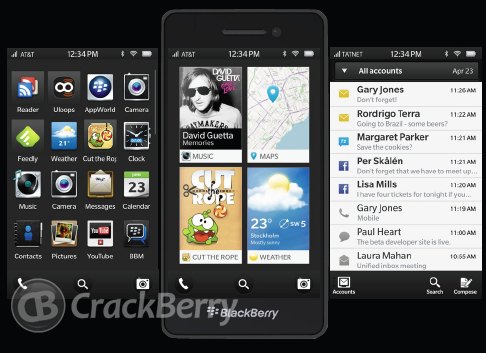 When Thorsten Heins introduced the BlackBerry 10 Dev Alpha on stage at BlackBerry World, many folks got a quick look at the BlackBerry 10 homescreen. Previous to that, we showed off some leaked images of what RIM was working toward which ultimately turned out to be accurate in terms of visual styling and now, we're getting a better understanding of what was happening in those images. Rather then the homescreen being "widget" based, you can think of it as more of frequently used app task manager.

The main screen will house your four (maybe more?) most recently used applications, though you should also have the ability to stick them there should you wish. To the right, you have all your current open application notifications. Where the messaging system itself never shuts down, all those items are only a quick swipe away which allows for easy access and quick glancing. On the left, is essentially your apps screen where you can access all of your installed apps. If it's not running, you can swipe over to it, tap and then run from there.

Though it's not entirely possible to be shown here in the images, it has already been confirmed that access to all these items will be gesture based. To get to them, you'll be swiping back and forth across the screen in specific ways, where each way will cause a different reaction. We'll have to see how intuitive that all turns out to be but until then we'll just enjoy the view of these concept images from RIM themselves.