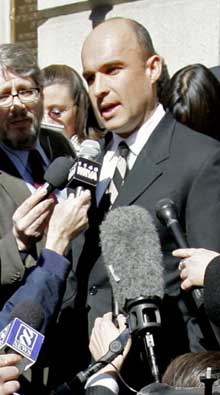 Research in Motion announced this morning that it misstated past earnings to the tune of a quarter billion dollars, which resulted in the resignation of Chairman Jim Balsillie and a significant shake up at the company.

Research in Motion, the maker of the Blackberry mobile phone and email device, said on Monday it would have to restate earnings figures since 2004 and lower them by $250m after an internal review found errors in its stock options accounting.

And the fall out is pretty big. Jim Balsillie will resign as chairman of the company, although he will stay on as co-chief executive with Michael Laziridis. Dennis Kavelman, chief financial officer, will become chief operating officer. Both men were implicated by the review as having had control of the stock options granting process.

As a result of the announcement the stocks took a tumble this morning, which probably isn’t good news for the stock market either. RIM stocks were down nearly four percent on Monday morning trading.

What is it with Canadian companies and their accounting controls? Nortel, the telcom giant, has been off by the odd few hundred million in earning reports a couple of times too.

We at Crackberry.com still love you Jim.