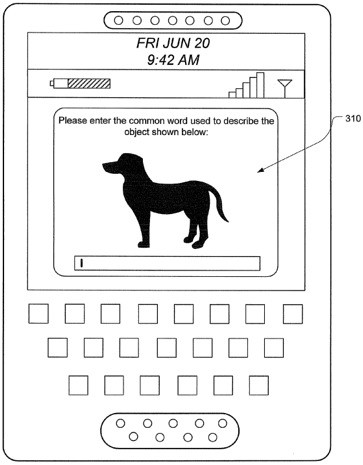 There are quite a few third-party apps that help put a damper on texting while driving by disabling all or parts of your phone and sending messages on your behalf when activated. These seem like a great idea to minimize distractions and keep your focus where it belongs.

It appears that Research In Motion wanted to implement something like this into BlackBerry smartphones, and applied for a patent several years ago that would require users to answer a CAPTCHA before being able to send an outgoing message while the device was moving between 6-10 km/h and 200-240 km/h (approximately 3-6 mph to 124-149 mph). Yes that's right, a CAPTCHA. There were various types of these puzzles included in the patent, including the distorted letter type, math questions, identify the object in the picture, and others. These were designed so that a passenger would be able to solve them easily, but a driver would have more difficulty, and therefore not try to solve which in turn would make everyone safe. Puzzles would be determined by the speed the device is traveling.

While I can see the good intentions behind the patent, I also have to say I'm thankful that it took so long to get approved and that it's not currently implemented in any devices. Hopefully RIM doesn't plan to include this feature in upcoming devices, as it seems (to me at least) that if someone has the intention to send a text or email or other message while they're driving, a CAPTCHA won't stop them and in fact will likely just distract them even further from the road.